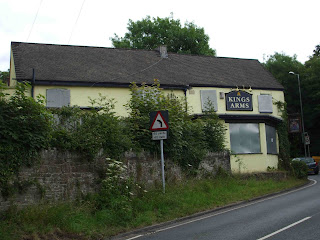 Part of an occasional series in which the latest pub closures/openings in and around Newport are mentioned.
Errors and omissions accepted, if any readers have anything further to add please put them in the comments section. NB Comment moderation is enabled due to spam.

The Hornblower is opening and closing on a regular basis these days, it might need a section all of its own one of these days.

@fido - have heard that Alchy Karen's daughter is back in charge of the 'blower so expect the high level of customer service and cleanliness that we had under that regime.

A depressingly long list there - I assume this represents a significant winnowing out of the pre-existing pub stock in Newport.

Regrettably this is all too typical of many other parts of the country :-(

The Carpenters Arms High Street is closed.. As is the pub under the Car Par opposite where the Drugged up Chav scum used to go, possibly called Glitterball?

Mentioned the Carps, No2 on list.
Not sure if the Gold fish Bowl/Glitterball was ever a pub, thought it was part of the nightclub next door and did coffee in the day?

Passing the Goldfishbowl today it had a legal notice up saying the windows are being bricked up and changed into office space..

The Chav place next door Yates has also re-opened as a Australian theme bar but I've yet to see anybody in there.. Probably be closed again soon..

Also the Globe and The Star appeared to be closed last night and where up to let.. As was the Tredegar Arms but they where advertising that as being used as Office Space

More nightclubs then pubs and a cause for celebration, but the Chav friendly Escapade and Fire and Ice have shut down..