This is not going to be a rant on having smoking back into pubs, but a look at what was once commonplace in upmarket Victorian pubs. 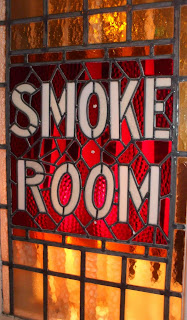 Walking out of the Otley Arms the other night after a very enjoyable night on the Columb-O, the light streaming through the old stained glass windows struck me. This pub used to be owned by the former Ely Brewery and was bought by the Otley family in the 1970s and is one of the few pubs left with the old Ely Brewery stained glass windows. One of the windows has the legend “Smoke Room” in white stained glass lettering on it. Thankfully one of the New Labour Nazis of the Bully State, progressed as they have from the Nanny State, have not yet told this pub to get rid of this blatant piece of pro-smoking propaganda but it did get me thinking as to what was a “Smoke Room”.

The interior of the Otley has been much-altered over the years, to the improvement of the pub, so there are few if any clues as to the original layout of the interior. Similarly the Red Lion on Stow Hill, Newport has an etched glass window with “Smoke Room” on it, but the interior was knocked through here in the early 1990s, destroying the room in question.

Luckily the Capel, Gilfach Fargoed, built in 1912 by Phillips Brewery of Newport, still has its etched glass windows and original interior intact. The etched glass in the doorway of the passageway has “Commercial and Smoke Rooms” on it and leads to what is called the “Singing Room” today where the karaoke machine has taken the place of the pub piano. This room is also accessed via the walking through the bar servery. This Smoke/Singing room is separate from the other parts of the pub, allowing commerce or other activities to be carried out away from the main bar. 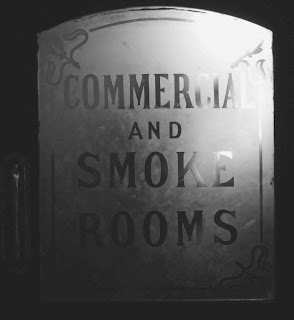 Above: Etched window in the Capel
On nineteenth century plans of public houses the smoke room is quite often marked and was a separate and distinct room from the parlour, tap room, saloon, vault or bar. Smoke rooms tend to be found in more upmarket pubs, “implying more relaxed drinking and refined surroundings than in the public bar”1

The Capel may have the only surviving Smoke Room in the South Wales area but there may be one or two pub windows still surviving. Smoke rooms seem to have stopped being built in the 1930s - the upmarket pubs used the term 'Lounge' from there onwards.

1. Licensed to Sell – The History and Heritage of the Public House, Brandwood, Davison, Slaughter 2004 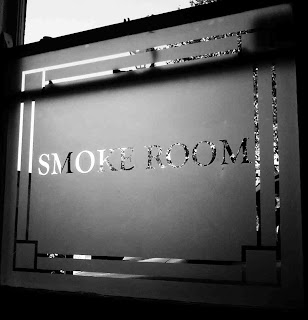 The Butcher's Arms, Llandaff, Cardiff also has etched glass windows with "Smoke Room" on them

I always forgot to take photos of smoke room signs/windows when I see them not very often...

maybe the lot over at www.beerlens.com could do a special on them?