Worthy of a Blue Plaque? 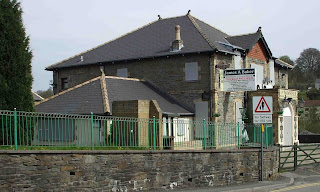 It's not just Newport where the pubs are closing - this photo is of the Woodfield in Blackwood, formerly the Mason's Arms and the birthplace (or so he claimed in a television interview) of former MP Neil Hamilton. The pub was run by his grandfather.
The Mason's used to do a couple of real ales about 15 years ago - it has been years since I visited it and it did feature in the CAMRA Good Beer Guide. Think the brewery was Courage so the Mason's may well have been part of the Phillip's of Newport pub estate. Not sure which pub company owns it nowadays but the freehold is for sale.
Not even a blue plaque outside to mark the birthplace of one of the more colourful former Members of Parliament, if this had been a Labour MP the local authority would be naming streets after him.
Woodfield, former Mason's Arms
Bridge Street, Blackwood, NP12 1AX