British pubs raise over £100 million for charityin the last year


· 85% of pubs raise money for Charity
· Each pub raises on average £2,742
· 5% growth in fundraising since 2010
· New research shows people would visit pubs
more regularly if their local pubs organised
more charity events
· CAMRA launch national ‘Pubs & Charity’
campaign to raise awareness of this fantastic
work
CAMRA, the Campaign for Real Ale, in
association with PubAid, has launched
‘Pubs & Charity’ month and announced new
research that shows British pubs raised more
than £106 million in the last year for different
charities. This is an average of £2,742 per pub.
In a study conducted by CGA on behalf of
CAMRA and PubAid, results showed that 85%
of pubs were actively raising money for charity
and despite tough economic times, funds
raised annually by pubs had increased by
nearly 5% since 2010.
CAMRA’s ‘Pubs & Charity’ campaign
encourages pubs to organise charity events
throughout July and promote the amazing
work they do to the media and their
communities. Pubs sometimes get unfairly
blamed for anti-social behaviour in villages,
towns and cities and this campaign aims to
help raise the profile of the British pub.
In a separate independent survey
commissioned for CAMRA and PubAid by TNS,
research showed that more people would use
their local pubs if more charity events were
organised. 21% of all adults agreed with this
statement but it was an amazing 32% of young
adults aged 18-24 who said they would use
their local more regularly if more events
supported charities.
CAMRA has issued around 7,000 free
promotional packs to pubs to help them
advertise what they have planned for July. This
campaign will not only benefit charities but
also encourage more people to support their
community pubs, which is important at a time
when 26 pubs are closing every week.
Mike Benner, CAMRA’s Chief Executive said,
“CAMRA and PubAid feel it is time British pubs
got the recognition for the amazing funds they
raise for numerous charities across Britain.
Pubs can get unfairly blamed for a lot of anti-
social behaviour but often the alcohol that has
led to these problems has not been drunk in
pubs.”
Benner concluded, “The pub industry has been
struggling in these tough economic times but
our new research shows all parties win if pubs
run charity events. The charities get important
funds, pubs get busier and the locals get some
fun events to attend. We hope everyone will
encourage their local pub to participate in
July’s ‘Pubs & Charity’ month and the
community will support these activities.”
Des O’Flanagan, one of the co-founders of
PubAid, said: “What other industry can
demonstrate such generosity and selflessness
in this economic climate. These results should
act as a reminder that pubs are very much
part of the fabric of our community and make
a meaningful contribution”.
Mr O’Flanagan added, “The PubAid team is
dedicated to combatting the areas of the press
and perception from some corners that view
pubs as only having a negative contribution to
society. We do this by sharing the work that
pubs do for charitable causes. The contribution
of licensees and their customers is made even
more amazing if you consider the financial
pressure licensees and consumers are under at
the moment”.
JD Wetherspoon, who has a pub estate of over
850 pubs, has recently announced they have
now raised a staggering £7 million over the
years for CLIC Sargent.
Lorraine Clifton, Chief Executive of CLIC
Sargent said, “This is a towering achievement
by J D Wetherspoon and it means everything
to the children and young people and their
families whom we look after. Every penny
raised means we can help more children and
young people and their families coping with
cancer. That is priceless.”
A few examples of what pubs in the ‘Wales’
CAMRA region have been doing:
The Crown Inn (Llwyndafydd),
Llwyndafydd, Wales (SA44 6BU)
The pub ran a charity Family Fun day on Sat
4th May raising over £550 for the Womens Aid
West Wales Charity. Lots was going on
including Live music outside during the day
and inside at night, donkey rides, bouncy
castle, duck racing, cheese and wine tasting,
all day food, childrens story telling etc and
local stalls.
The Crown Inn, Llantwit Fardre, Wales,
CF38 2HL
The pub allow charities to have fund raising
events in our function room at no charge (e.g.
Rhondda Breast Friends, MacMillan) hold
coffee mornings for MacMillan, hold a weekly
quiz to raise money for: M.S., Cancer
Research, Bobath, Dogs Trust, the local Scouts
Group, Joshua Foundation, and have regular
charity raffles and other special events
throughout the year.
The Blinkin Owl, Torfaen (NP 44 4TP)
The Blinkin' Owl hosted four days of activities
over the bank holiday weekend in 2012 to
remember Kirsty Allen and to raise money for
the Children's Liver Disease Foundation. (Miss
Allen was 20 when she died from the liver
condition autoimmune hepatitis on August 27
2011). The pub also organise ongoing charity
events.

At the end of the July, the award-winning Gwatkin Cider Farm will be playing host to a three-day music and cider festival at the farm in Abbeydore, Herefordshire. Down on the Farm will feature 14 different ciders, local real ales, local food as well as a range of bands from an AC/DC tribute act to Denis' very own Abysmal punk tribute band!
|Full details are on the Festival website here and tickets cost
Friday 26th £10, Saturday 27th £20, Sunday28th £8
Weekend Tickets £35 to include camping (limited availability)
and can all be bought online via the website or via the farm shop

So a weekend of cider, real ale and music in the middle of the Herefordshire Countryside, what more could anyone want?

Some of the music from the festival last year 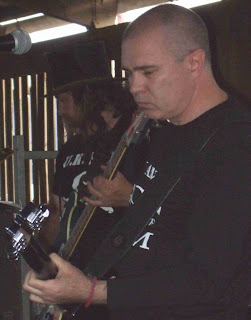 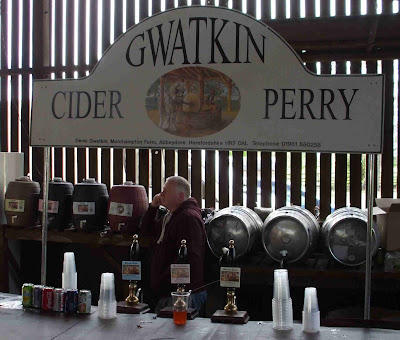 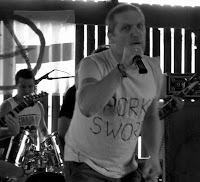 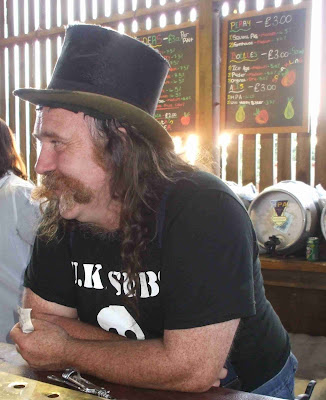 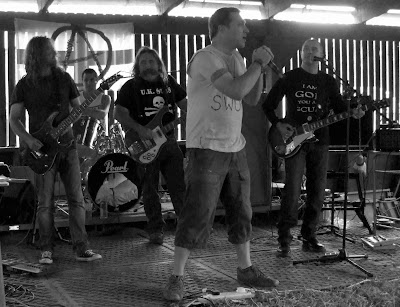 Yes even the Wurzells have played at the farm! 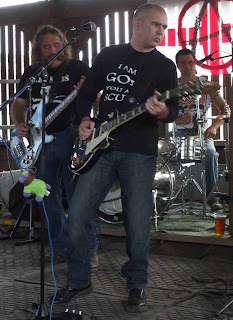 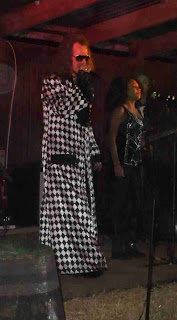 Dr & the Medics have played at the farm as well! 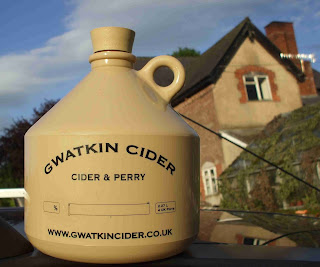 Grab a flagon or two at the farm! 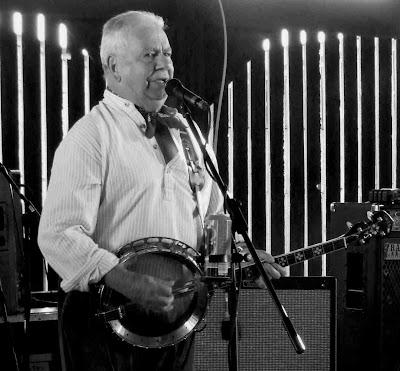 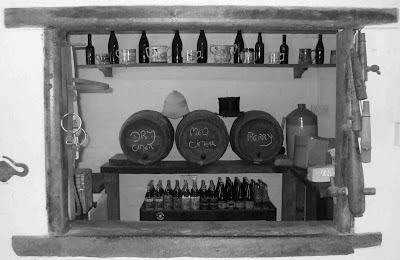 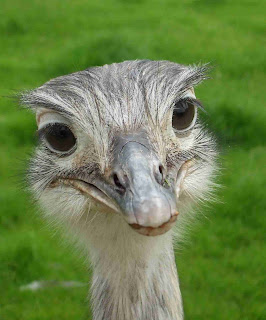 I think the chickens at the farm have been on the cider! 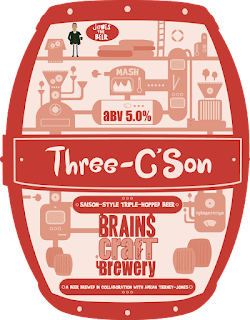 Award-winning writer Adrian Tierney-Jones has collaborated with Brains to produce Three-C’Son – a traditional farmhouse Saison with an added twist of three American hops.

This is the latest collaboration Continental Beer from the craft brewery. In their second Annual Challenge, Brains have invited writers and bloggers, including Adrian, Pete Brown, Sophie Atherton, Des de Moor and Glenn Payne to develop their ‘ultimate Continental Beer’. The challenge will see a range of styles brewed including a Marzen and a rye beer.

Adrian – author of 1001 Beers You Must Try Before You Die – chose to brew a 5.0% traditional saison with a twist of three American hops – Centennial, Columbus, Citra – giving the name Three-C’Son.

Bill Dobson, head brewer at Brains, said: “It was great to have Adrian brew with us. He had a clear idea of the beer he wanted to brew, and the additional twist of adding the American hops gave it an extra dimension.”

Contenders in the Continental Beer challenge so far are Pete Brown, who brewed Dissolution, an abbey-style dubbel, and Robyn Black from the PMA who brewed Blackbird, a schwarzbier.
All seven Continental Beers, including one from Brains, will be independently judged at an event on December 5th. The winning beer will become part of Brains’ beer festival programme.
The first Annual Challenge in 2012 was the ‘Ultimate IPA’ and saw the likes of Melissa Cole, Simon Martin, aka Mr Real Ale Guide, and Tim Hampson brew their take on an IPA with Brains. Crowned the Ultimate IPA was Boilermaker, which was brewed with Ben McFarland and Tom Sandham from Thinking Drinkers.

Three-C’Son will be available in selected Brains craft beer houses from Monday 1st of July in cask in these locations.

Tasting Notes:
Three-C’Son is a Saison style beer brewed in collaboration with beer writer Adrian Tierney-Jones. Brewed with Pilsner and Wheat malt this beer is pale and hazy, like a sunset seen through the filter of a disintegrating summer’s day. A sweet nose of ripe peach and citrus, a green apple snappiness on the palate and a hint of white pepper from the Three C’s of Columbus, Citra and Centennial, combines with an earthy spice from the use of a traditional Saison yeast that is followed by a firm, refreshingly dry finish.