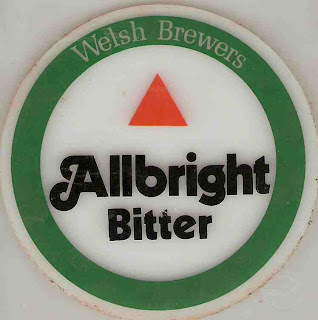 Hall of Shame part 4
An occasional series devoted to the worst in the brewing world.

Allbright, Welsh Brewers.
Dreadful keg beer which dominated the South Wales valleys for decades. Alllbright was weak, 1033 OG about 3.3% ABV and was a pasteurised version of the popular Hancocks PA (Pale Ale). First brewed in 1963, it came to dominate the Hancocks pubs and later when Bass bought them; together with Webbs Brewery to create the huge Welsh Brewers empire, their pubs.

“The most popular beer in Wales” went the slogans on advertising mirrors in countless bars across the region. The chimney stack of the old Hancock's Brewery in Cardiff had Allbright in large letters on it for years, until the brewery was bought by Brains and it was a good day for real ale when they put their name to the stack. Allbright was only ever sold in Wales, in England it was marketed as 'Toby'. In the late 1990s, whilst Bass still had a pub estate, sales dropped off and they were even overtaken by sales of Hancocks HB, the cask beer produced at the same brewery in Cardiff. Not sure if it is still made, Coors would no doubt own the brand nowadays but have not seen it on a bar for years.

Hailing as I do from sarf London my first experience of Allbright was when during my freshers week at Cardiff University in the late 70s. They sold it in the Union bars and even at the hall of residence where I stayed initially.

Knowing very little about beer quality at the time I lapped it up as it was cheap and you could drink lots of it without falling over.

Sacrilegously I also used to mix it half and half with Brains Dark which they carried in flagons (2pt containers) behind the bar - my own mild and bitter combo.

Eventually of course I found my way out of this nonsense and discovered real Brains Dark and SA etc.

But thank you for bringing back a part of my youth.

Im a Drayman in South Wales, and I drank a pint of Allbright today on my rounds. Wasn't bad at all.

Nats piss in butlins, need a pint of old thumper.

Drinking a pint of it now. Still a better pint than fosters or carling

I worked during the summer of 1964 in the old Hancocks brewery, later owned by Brains. Infinite care was taken with brewing HB, virtually none at all with the keg version, which was drawn off and done to death with carbon dioxide (my job). It amazed me then and still does that people could be persuaded to pay more for the keg version, which at that time was marketed as Barleybright. I enjoyed my time at Hancocks (there was a strike on my very first day), except for getting my leg stuck in a conveyor belt on my last day, but that's another story.

I cut my drinking teeth on Allbright in mid-Wales pubs from 1977 onwards. Pint was 30p in those days, even for a student it was possible to have a skinfull for less than a fiver. Maarvellous! My bladder couldn't take it these days.

Still served at Prince of Wales, Kenfig Pool.Great pint with fab bar meals on offer at the pub.

My creative partner Phil Wiggins and I wrote the Allbright series of commercials featuring Tom & Rob while working for Bass at advertising agency Doyle Dane Bernbach in London. Great fun to create those characters, Sorry about the beer.