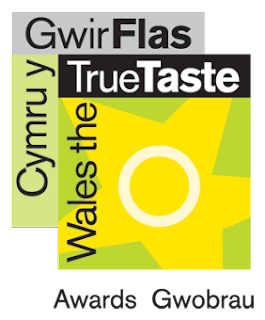 It's that time of the year again when the Welsh Assembly Government announce the True Taste awards. The awards were presented last night (Thursday) at the historic market hall in Abergavenny. Although one producer did decide to ignore the embargo and announce they had won an award the day before via Facebook.

Now in their eighth year, the Welsh Assembly Government managed awards reflect the increased demands from consumers for locally sourced produce along with those of the export market place. The 2009/10 awards has seen some 860 entries from over 400 companies – over half of producers in Wales.

he independently judged awards were founded to recognise and reward quality and innovation across the food and drink and hospitality sectors.

This year there were 18 award categories catering for all areas of food and drink production, retail and hospitality sectors as well as a new Export Achievement Category, which was won by The Anglesey Sea Salt Company.

Rural Affairs Minister, Elin Jones said, “The Wales the True Taste Food and Drink Awards are a tremendous showcase for the Welsh food and drink industry.
Once again the Awards have highlighted just how much high quality food is available here, and I congratulate all those who have received awards.

“Earlier this year I launched our Local Sourcing Action Plan which encourages us all to buy more Welsh food. There are so many benefits to buying local: from reducing food miles and supporting the local economy, to the reassurance that comes with knowing where our food comes from and how it has been produced.

“While our Food Tourism Action Plan is all about improving visitor experiences in Wales as a destination where high quality and distinctive food is widely available in our cafes, restaurants, pubs, hotels and guesthouses.

“We want to ensure that our visitors are provided with an exceptional food experience based on locally sourced and distinctive food. In 2008 the first category for Food Tourism Destination was included in Wales the True Taste Food & Drink Awards and this year’s winners – Pembrokeshire County Council - will help raise awareness of the excellence of Food Tourism outlets throughout Wales.”

A number of companies scooped more than one award; among them were South Caernarfon Creameries, Penrhiw Farm Organic Meat, Oaklands Organics, Gill’s Plaice, Greta’s Wholefoodies, and Hafod Welsh Organic Cheddar. It was a good night in particular for Primrose Organic Centre which won awards in several categories.

While the main award of the night, the True Taste Champion was awarded to Deiniol ap Dafydd of Blas ar Fwyd Cyf in Llanrwst.

As usual Brew Wales have sifted the results for the interesting ones:

Eating out in Wales -

GOLD - The Crown at Whitebrook - Overall & 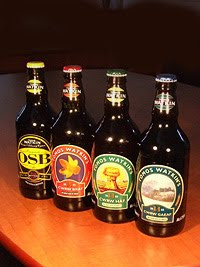 I notice that on this, a brewer blog you fail to discuss the winner of the alcoholic beverage category, perhaps being impartial should have been your new years resolution.

Perhaps being less paranoid and putting your real identity online should be your new year resolutions. Unfortunately the winner, for the second year running does not appear to be commercially available in Wales as neither Sainsbury or Waitrose appear to stock it, despite some propaganda from the brewery saying it is available in those shops. That is why I have been unable to review the beer. Besides this is my own personal blog, not that of a sad snake oil salesman who gets his catamite to write his attack blog on me.

I hate to disappoint you, I am not simon buckley, although I would love to meet the aquaintence of someone that produces such fine cask ales.
I am thrilled you havent reviewed this beer. I need no review but my own tastebuds and they are never biast.
I have been introduced to your blogs by a friend and have found you to be racist, prejudiced and bitter. Clearly this friend wanted to torture me.

"fine cask ales"????
More like "bitter so bland it is like swimming up the River Towy with your mouth open and a hop leaf between your teeth".
Well if you find this blog racist, prejudiced and bitter you obviously don't get satire.
No one is forcing you to read this so if you don't like it don't read it!