The pubs of Pill, Part 1

Part 1, the Closed Pubs
Pill or Pillgwenlly is the docks area of Newport and the area was built in the nineteenth century. Named after the Welsh for 'inlet' and the name of a local saint, the area has been declining for a number of years and has seen a lot of pub closures. Many of the former pubs still stand and have been converted to alternative uses, these photographs show the buildings as they are now. Additional information is from Alan Roderick's book 'The Pubs of Newport' (1997), copies of which are now going for £26 on Amazon!
White Hart Inn, 5 Tredegar Street 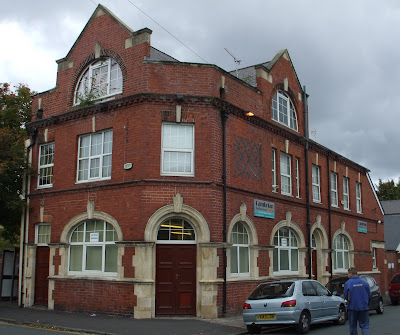 First mentioned in 1859, the pub closed around 2000. Now used as offices.
Being opposite the Cattle Market, now the site of Asda supermarket, the pub had extended hours on Wednesdays as these were the market days.
Owners: 1905 Rogers & Co of Bristol, 1938 HG Simonds, Courage, Ushers
Castle Hotel, 28 Commercial Road, on corner with Tredegar Street 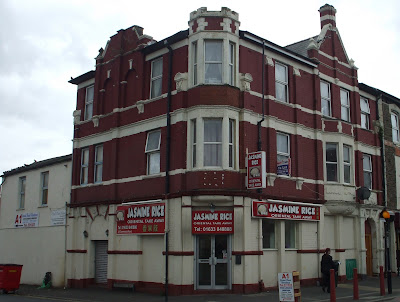 First mentioned in 1862 as the Castle Inn and Brewery, the pub shut around 1977. Now used as residential/take away, although it has been used as an amusement arcade in the past.
Owners: 1933 Phillips, 1954 Simonds, Courage.
Welcome Home, 46 Commercial Road, on corner with Dolphin Street 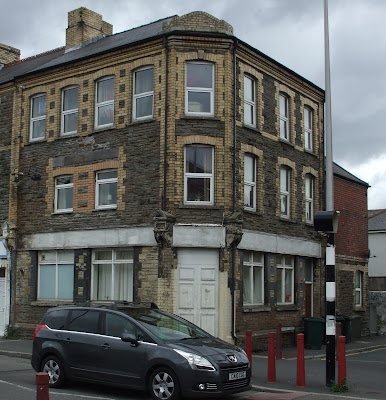 First mentioned 1848, this pub closed in around 1997. Now used as residential. In its last few years the pub was a well-known trouble-spot with stabbings and a shooting.
Owners: 1905 Lloyds & Yorath, Ansells
Commercial Inn, 47 Commercial Road, on corner with Dolphin Street 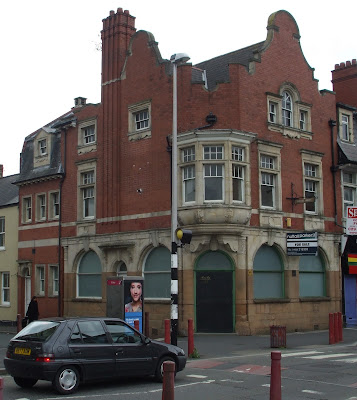 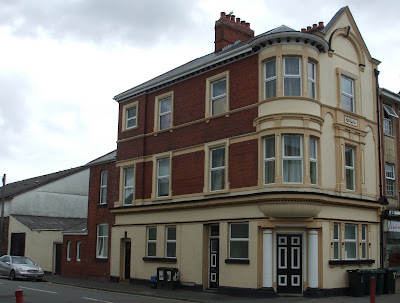 First mentioned in 1872 this pub closed around 1979 and has been converted to residential use.
Owners: Phillips, Courage
Royal Exchange, 161 Commercial Road, was renamed 'Harvey's of Pill' 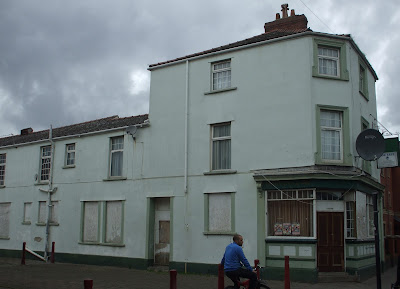 First mentioned in 1872 the pub closed in 2005 shortly after the death of local gangster Lemmy Bullock who was killed with a samurai sword in the pub by a rival drug gang.
Owners: Lloyds & Yorath, Ansells, Harveys
Black Horse, 66 Commercial Road 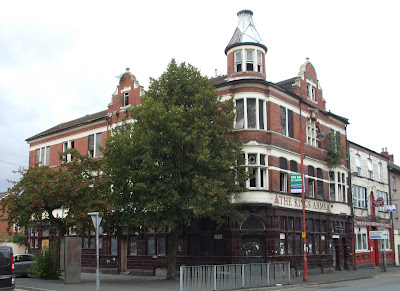 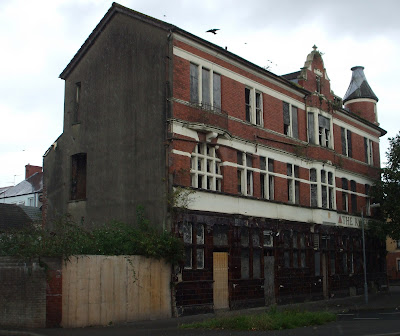 First mentioned 1845 this landmark pub closed around 1993. Building is currently derelict and there have been a number of fires at the premises, the most recent one was in the last week.
Owners: Thatchers, Mitchells & Butlers, Bass
Cambrian, 112 Commercial Road,

Rear of building on Courtybella Terrace 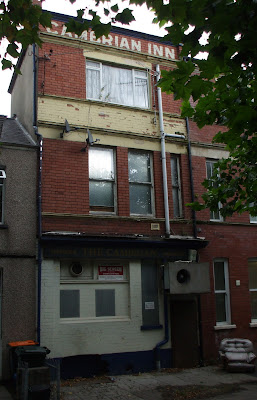 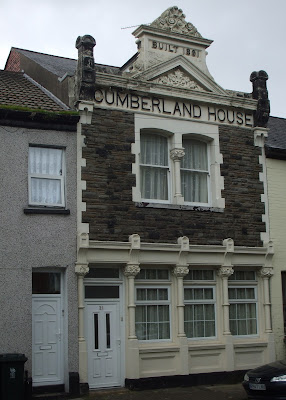 First mentioned 1872, rebuilt 1891 and closed around 2005.
Owners: Hancocks, Welsh Brewers, private
Part 2 of this piece will feature more of the closed pubs with part 3 focusing on the open pubs (yes there are some!)

my great-grandfather was landlord of the Falcon Inn in the early 1900s (now known as the Black Horse). Photo here http://www.newportpast.com/gallery/photos/php/photo_page.php?search=%20&search2=yyyyyy&pos=634

Lemmy Bullock was certainly not a gangster, and you do his family and friends a great disservice by calling him that.

Lemmy Bullock was banned from most pubs in Newport because of his drug dealing and businesses in Pill were told to close the day of his funeral or have a brick through their window. Sorry, I should have called him 'Drug-dealing wannabe gangster scumbag'. The world and pill is a far better place without him!

Who are you? As you certainly are not someone who knows Lemy Bullock as you would not be wrighting such hideous lies about a well loved man of the pill community! A drug dealing gangster? Where did you get such information? Pubs were shut ?More lies!! You only have to google Lemy Bullocks funeral to see the huge amount of people that attended to pay their respect to a loved Son, Father, brother, Uncle Friend. This is slander at it's worse just to make your boring blog sound slightly interesting. You should be ashamed when the man himself can't be given the opportunity to voice his side of events!

Are you denying Lemmy Bullocks's extensive criminal record? Or that he was banned from most pubs in Newport due to his drug dealing? Those are facts. Are you even denying his death involved a drug feud? The world is a far better place without him

Facts!?! Do you know the definition of the word ? You haven't wrote one "fact" think you need to go back to your source of "facts" and start again with the truth! his family an friends do not think the world is a better place without him they are still grieving from his horrendous death 10 years on. Now go and do your homework before your write more lies! The only wannabe I see is you

U vile excuse of a human bein have a bit of respect for the family and friends of lemy and what he or any 1 else did or does is none of yr gd damn business fact ....... and the only scum bag is u 4 blogin lies

A BUILDER who stood up to a gang of thugs was murdered with a samurai sword in his local pub, a court heard yesterday.

Lemmy Bullock, 36, challenged the gang after they attacked his family and warned them about their "bullying and intimidation".

But the court heard the masked gang confronted father-of-three Mr Bullock in his local pub where he was slashed with the sword by leader Aaron Kent.


and that's the real facts!

His death didn't involve drug dealing you imbecile. Also, he wasn't banned from most pubs in Pill at all. He was welcomed for that matter. Who are you anyway? Probably not even from Pill. I would like to hear from landlords/ladies around Pill and ask them was Lemmy banned or welcomed in their pubs. What a low life you are.

Well what a load of shit Brew Wales Lemy was a well liked and loved guy im sure if you didnt want to or say need to look like you can put a good blog up you wouldnt of wrote LIES after all bad blogs that have LIES in do get a reaction so now u fat fucker you got one ru HAPPY SCUMBAG..........

you dont know what your talking about , try to get more likes for your shit blog.....lemmy wasnt a gangster nor was he a drug dealer, and i would love you to show us his crimnal record. What a load of fabrication ...you JOKER

Really?
You have to go to such a level !!

A couple of things outside of your defamatory comments, regarding the memory of man who was someone to everyone.

You have chosen to take pictures of the lesser developed areas, with intent to not only blacken a dead mans name, but an estate as well.

Further you reference a book about pubs from 1997! You sir should rethink whatever career path you think blogging will get you.

Brew Wales, you clearly are very deluded to the actual facts of the case you seem so certain to know. So as Kelly rightly says this is slander at its worst. Provide your evidence to your upsetting judgements and prove that you are genuine and mean what you say.

Where do you get your "facts" from?

Brew you are a first class cunt

Bloody disgusting your nothing but an animal to write lies about a young boy who life was taken. I hope karma bites you big time and you are shown up to be a big liar chasing headlines If you want to write lies about a person research the facts you big fat prick. Just for the record the world would be a lot better without people like you, Who the fuck are you judge anyone when you didnt even know him. Lemmy has hundreds of friends and family who love and respected him, can you say the say about your life NO. Get a grip and stop chasing headlines and using a young boys name just to advertise your pathetic site. I wish i could write more but what i want to write is illegal, so on that note i wish you all the harm anyone could hope to inflict on you BYEEEEEEEE

How disrespectful is this pathetic blog.. obviously didnt know Lemmy .. So you obviously shouldn't judge .. He had nothing whatsoever to do with drugs he was a hardworking man ....I suggest you remove this before family see it .. Have some respect !!!!!!

How dare you offend such a lovely family that are still grieving for the loss of a wonderful son father brother and uncle .you slanderous nobody !!! Get your facts right idiot

"The world is a far better place without him", you said. How dare you? What a spitefull self centred person you must be. He was a much loved Son, Brother and Father. No, he wasn't purer than white not many of them growing up in Pill when I lived there. It went with the territory. But as Kelly says you couldn't have possibly known him just a reputation that was falsely reported. As this site is meant to be a walk down memory lane about the number of pubs in Pill and their history. What has this slanderous comment have in the slightest to do with it! Why not remove it and show some dignity and respect to those who mourn his passing?

Fat Prick You Are A First Class Cunt

Fat Prick You Are A First Class Cunt

Thank you for your comments. Are you denying Lemmy Bullock had an extensive criminal record for drug dealing?

Just a typical keyboard warrior that did not know anything about our late Lemmy ,you must be running scared now as a lot of Newports finest people are looking for you , you silly vile individual .. Retro Ormond

you obviously are looking for a reaction , your comment about a murdered man is vile , i pray his family dont read them . i think you have upset a lot of pill people ( myself included ) and a hell of a lot of newport with your stupid comment

Yes. I am. And anyway, who are you?...judge, jury and executioner?. You aren't even known by the massive majority of Pill people but yet you seem to speak for the landlords, landladies, shop owners etc when you say they were threatened with a brick through the window if they didn't close on the day of the funeral. That is pure lies and you know it. First off, common decency probably made half the people do it, the other half probably knew Lemy personally and would be glad to do it. This is libellous territory your getting into my friend. Ain't you a wannabe MP?...you need to work on your inter personal skills my friend, then again, most MP's make a living of untruths so you would fit right in. Scum.

Thank you all for the threats, it just goes to show the scum of the earth that inhabits the slum called Pill.
As for facts, Bullock had been banned from Newport pubs under the Pubwatch scheme for drug-dealing, the only pubs that would serve him were the ones in Pill, where a blind-eye was turned to his criminal activities. It just goes to show how low the people in that slum are, that they are willing to defend a dead dealer

What an arrogant arsehole you are. Instead of trying to bury the hatchet and apologise you decide to make a blanket statement and insult the whole of Pill. Rest assured I won't let this lie you sad little creature.

The Welcome Home was a well-known drug den and you should be ashamed of yourself for allowing it to become one. As for the stabbing, Alan Roderick's book 'Pubs of Newport' mentions it.

Oh, a book said it. It must be true. I mean, you write a blog that is littered with lies. Pathetic ugly hideous twat

1st class prick ur mother should of named u!!!