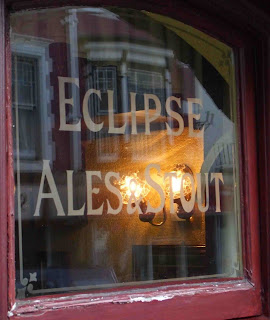 There are a few old advertising windows left in the pubs in Monmouthshire but the most intriguing involves the Eclipse Ales windows in the Coach & Horses, Chepstow and the King's Head, Abergavenny (pictured left). Both these pubs still have their old windows with Eclipse Ales and Monopole Scotch Whiskey. Now I can't find any reference to a local brewery ever producing Eclipse Ales and the Century of British Brewers Book only lists an Eclipse Brewery, off Deansgate, Manchester 1860-1877, eventually acquired by John Lees in 1894. Don't think that is of much help as it would be unusual for the windows to survive over 140 years and to be from as far away as Manchester. The King's Head was owned by Arnold, Perrett & Co Ltd of Wickwar, Gloucestershire, between 1914-1938. The Coach & Horses, Chepstow is now a Brains pub and was formerly a freehouse, so the ownership of these pubs does not help anything.

Below are 3 pictures of the windows of the Coach & Horses, Chepstow. 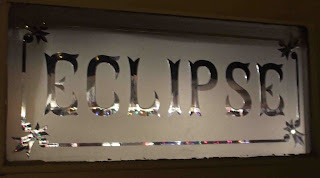 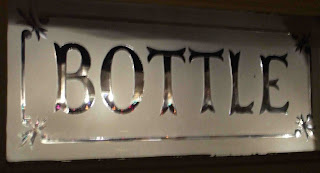 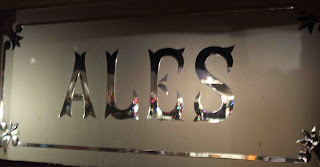 So over to my readers, anyone know where Eclipse Ales were?

Arnold Perrett & Co of Gloucester. Taken over by Cheltenham & Hereford in 1924. (See items on ebay. Also made Monopole whisky.)