An occasional series devoted to exploring the myths, half truths and outright lies that pubs use to promote themselves. 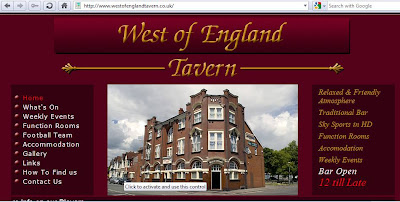 www.westofenglandtavern.co.uk
A bit of Googling the other day and I came across this website for the West of England pub in the part of Newport known as Pill. Now I used to live in the area and this pub was a keg only boozer inhabited by local drug dealing pondlife who had been banned from the rest of the town. In fact the only decent pub in the area at the time was the nearby Ship & Pilot, which featured a regularly changing guest beer, something no pub in the area now does.
So let's examine the claims made on the website of this pub (in bold):
“One of the oldest taverns in Newport”
Apart from the Royal Mail (Old White Lion), Murenger, Carpenters Arms, Potter's Arms, Six Bells, Greyhound, King's Head, Cross Keys, Red Lion, Griffin (Blucher's Arms), Delilah's (Tredegar Arms), Ship & Pilot, Prince of Wales. Not even in the oldest dozen.
First mention of the West of England Tavern is not until 1838
“dating back to in and around the 1800s”
In Kelly's 1838 Directory the West of England is listed as a beerhouse, the Beerhouse Act of 1830 was a boost for the pub industry and it is very unlikely the pub dated to before that time.
“a Grade 1 listed building”
Now this really takes the biscuit. The West of England was rebuilt in the 1880s and a lean-to extension was built in the 1980s using bricks of a different colour to the original. If it was a Grade I (NB to their webmaster: Roman numerals are used in listing descriptions not Arabic numerals) listed building it would rank alongside the Abbey Hotel in Llanthony as one of the most important buildings in Wales. The nearby Waterloo Hotel is Grade II listed and quite rightly so. In fact the West of England is not listed by Cadw at all.
“serving a selection of lagers and real ales in a relaxed and friendly atmosphere”
Carlsberg, San Miguel and Tetley's Extra Cold keg beers is not a selection of real ales but then again if you believe this building is Grade 1 (I) listed then the author of the website is clearly deluded. Relaxed and friendly is a good description of the natives in the pub with their drug habit.

Well there you have it, a bit of mythbusting on one of the pubs of Newport.

The website has a grocer's apostrophe and actually says "one of the oldest Tavern's in Newport" ;-)

It's an impressive-looking building - but the inside shots look like a downmarket social club from the 1980s.

the place is under new management now, they are keeping an eye out for the 'druggies' and the website should be in-active no, they are slowly turning it around with better beer than the previous owner's

This is an AMAZING pub, the friendliest welcome you'll find in Newport!!! I've been there many times and NEVER seen any evidence of drug taking or selling!! The new management are lovely people and supporters of LIVE music which most landlords are too stingy to pay for!! Give it a try, the management are hard-working , decent people who deserve a chance to make their business a success, without people who have probably never even stepped foot inside the place, making ill-informed judgements!!!

I used to live near this pub and know exactly what used to go on. The place was so bad you used to wipe your feet on the way out

Guess it's okay to keep on slagging it off then even though your original post is three years out of date and maybe put some decent hard working people out of work, who are trying to turn the place around! Very charitable attitude!! I call that LAZY reviewing and therefore don't think any of your reviews are valid, relevant or reliable!

Oh dear someone does not understand how time works - this post was written 3 years ago! The date is on the top of the post and the review was valid when it was written! I'm so glad the pub is improving, despite idiotic customers such as yourself using it!

Ahem....I do understand how time works....I merely pointed out that as your review was 3 YEARS out of date that the information contained in it was invalid, irrelevant and unreliable! Neither chronology or the understanding of it is the issue here! You offer a review web page...if I'm going out for a drink tonight, I would like to know what a pub is like at the present...not what it was like 3 years ago under different management! I think it is you who have a problem understanding ENGLISH dear boy...not me with the problem understanding time!! We can all be patronising if called upon to be so....just making a point!! as for being idiotic....it's not idiotic to have an opinion, especially if one's opinion happens to be accurate!! Good Evening!! :)

Its a blog - a web blog accurate when it was published. Its not my fault you rely on out of date reviews when you go out. You have really put me off revisiting this pub!

The West of England has gotten SO worse since 2012, the previous owner knew what they were doing.

George Pring The landlord of The West of England Tavern was fined 10/- plus 5/6d in costs in May 1850 for allowing beer to be consumed at improper hours. Nothing changes

Monmouthshire is in England.

Monmouthshire is in England