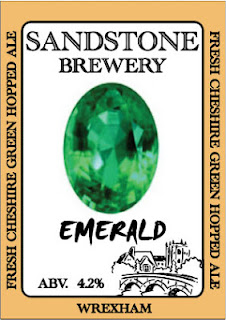 Sandstone Brewery of Wrexham managed to get their hands on some green hops during the harvest this year and have brewed a one-off special ale with them. Green hops are hops that have not been air dried as usual and so retain aromatics that are usually lost during the processing.

This beer has been developed to celebrate this years British hop harvest, Emerald is a light copper coloured traditional beer made with hops only hours from being harvested, still wet and green and haven’t been through the drying process. This imparts a completely different and fresher flavour to the beer. Sandstone Brewery have used Goldings from an allotment in Hoole in Chester supplemented by First Gold from the hop fields of Worcestershire.

If you’re in the Sheffield area, The Hop will be showcasing green hop beers from around the UK including Emerald at their festival from Thursday 18th October to Sunday 21st October.

Emerald will also be available at Chester Beer Festival from Friday 26th October to Saturday 27th October – but only one cask so when it’s gone, it’s gone.