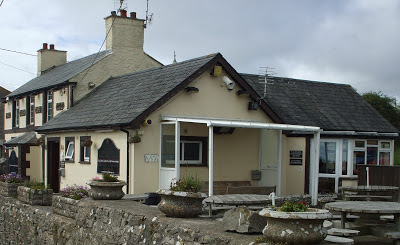 The Three Golden Cups is situated on a corner of the coast road that runs from Llantwit Major to Bridgend and good views can be had from the pub of the Jurassic Vale of Glamorgan coastline and the Bristol Channel. There is a bus stop outside the pub, the 145, or alternatively there is a large car to the side of the pub. Three Golden Cups feature on the pub sign outside of the pub and, more unusually on the front of the pub itself, emblazoned in golden letters and symbols across the mid-section of this two-storey stone-built pub.

The name of the pub comes from the coat of arms of the family who owned the nearby Dunraven Castle. 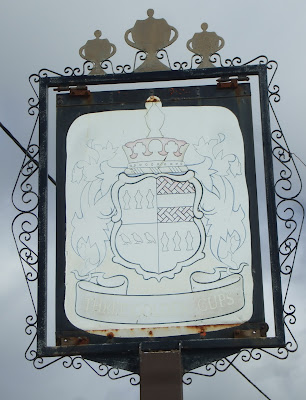 The pub claims to date from eighteenth century, though there have been plenty of alterations and extensions to the original building since then.

The entrance hallway leads to the dining area on the left of the pub and the bar on the right. The dining area features two fireplaces at either end of the building, originally this room would have been partitioned with a central entrance doorway which is now not used. One of the large stone fireplaces features sailing souvenirs from one of the many ships that have run aground on this treacherous stretch of South Wales coastline. A few old photographs, extensive wood paneling and old settles add to the atmosphere in this part of the pub. The thick stone walls are exposed as one steps down to the bar counter. The bar, to the right of the entrance is housed in a later extension to the building and a dormer window here provides a lighter alternative to the rather dark dining room. A bar carved out of light with high chairs around it and tables and chairs provide the seating in this part of the pub. One corner of the bar features a very unusual mosaic that covers two walls, a red egg is surrounded by eager spermatozoa attempting to fertilise it – not what the average customer expects to see in a pub but good on the pub for investing in risque modern art. There is also a large outside seating area to the side of the pub, as well as to the front.

Three real ales are served from gleaming brass handpumps, with Sharp's Doombar and Fuller's London Pride being the regular beers, both served in branded glasses, with the third pump being used for a guest beer,
such as St Austell Tribute. The Three Golden Cups is a new entry in the 2013 Good Beer Guide, published  by CAMRA, the Campaign for Real Ale.
Food is served 12-3, 6-9, all day at weekends and during the summer. There is an extensive printed menu as well as chalkboard specials featuring seasonal specials. The food is homemade and local ingredients such as faggots are used wherever possible. Regular live music nights are held here.

Traveline Cymru Information:
There is a bus stop outside the pub, the 145 Llantwit Major to Bridgend service, which does not accept the day rover ticket other South Wales services offer, nor does it offer a day ticket on its services!