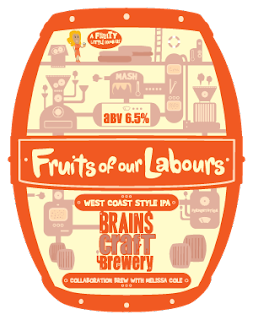 The latest offering from Brains Craft Brewery to hit the pumps is this fruity number.

Fruits of our Labours, a 6.5% ABV craft brewery ale, is an West Coast style IPA. Brewed with Citra, Simcoe, Amarillo, Cascade and Summit hops, and a blend of passion fruit, mango, peach and pineapple, the result is a ‘fruity little number’ with a huge tropical nose and a spicy, rounded bitter punch. The finish has a spicy, rounded bitter punch, making this beer a fruity little number

Melissa said: “It’s a little bit crazy up in my head, but there’s always a foundation in reality. So whilst Fruits of Our Labours might sound mad, all the fruit is actually designed to underpin the tremendous tropical fruit and citrus notes you get from many American hops, like Amarillo, which we used a lot of.
“The ‘fruity little number’ line, which features on the pump clip, is a little tongue-in-cheek humour aimed at my colleagues in the wine industry where the phrase is to them what ‘hoppy and malty’ are to me, a pretty much useless collection of words to describing tastes and flavours!

“I’ve found that a lot of my collaboration beers, because of their slightly wacky ingredients, have appealed to wine drinkers and received rave reviews from at least two respected wine writers and I hope this will be enjoyed by all lovers of fine artisan drinks.”

Fruits of our Labours is part of an India Pale Ale series, which sees beer writers and bloggers develop and brew their ultimate IPA. Guest brewers include Simon Martin, Martyn Cornell, Marverine Cole, and Ben McFarland and Tom Sandham. The IPAs will be independently judged at the end of the year and the winning beer will become part of Brains’ beer festival programme.

Dear Lord, that sounds awful. (Actual sweetness in a hoppy beer has always been a no-no for me.) I hope I get a chance to try it and prove myself wrong!