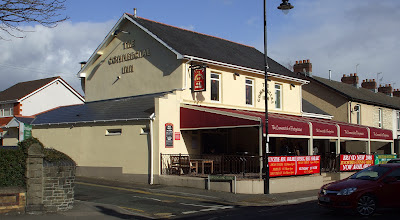 The Commercial is situated on the main road through this valley's town and a short walk from Pontymister train station, on the Cardiff-Ebbw Vale line, or alternatively there is a bus stop nearby. Built in the late nineteenth century, the Commercial at first appears to be a typical street-corner local, however this gem of a pub is owned by local pub company Dragon Inns who have invested heavily in the pub to transform it into a multi-award winning outlet. The swinging red pub sign hanging outside the pub has the words 'Free House' emblazoned on it. 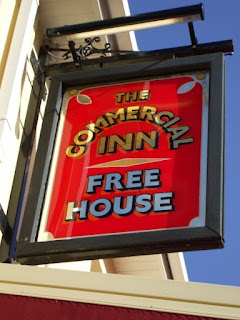 At the front of the pub, the covered veranda is heated and features benches and tables as well as a flat-screen television, smokers are well-catered for in this pub. There is also a large mural depicting some of the beers this pub has served over the years. The entrance hallway features doors to the lounge/dining room to the left and the public bar to the right, although the two rooms do meet up around the bar area. The carved wooden bar features five gleaming chrome handpumps, serving four real ales and a cider. The beer range is constantly changing but usually include something from the local Tiny Rebel Brewery of Newport as well as beers from breweries from across the country such as Abbeydale of Sheffield or Purple moose of Porthmadoc. A recent and rare beer on the bar recently was Black Falls Hopjam, a one-off, extremely hoppy special brew from Neath Ales. The cider is from Gwynt Y Ddraig. The Commercial Inn is a former local CAMRA Pub of the Year and holds Cask Marque accreditation as well. The many awards this pub has won over the years are displayed on the wall of the bar, together with the charitable donations the regulars have made to both local and national charities. Awards have come from not only CAMRA but from trade newspapers such as the Morning Advertiser and Publican, the Commercial Inn won Managed Pub of the Year for Wales for two years running.

The public bar area features a pool table and dartboard with electronic scoring board and there are flat-screen televisions throughout the pub, usually showing sporting events.

The Commercial serves food all day, both from traditional menus and chalkboard specials, with Thursday nights being grill nights.

Free WiFi is available via The Cloud.

Traveline Cymru Information:
The Commercial is very easy to reach by public transport with bus stops outside and a train station (Cardiff-Ebbw Vale line) a short walk from the rear of the pub