Customers can create their own ale in Newport pub

The Windsor Castle in Upper Dock Street Newport is under new ownership and the new people in there have an interest in real ale. The former Welsh Brewers pub has been through some bad times in recent years, suffering from being run by a pubco but now it is a free house changes are occuring. Already Rev James has been seen on the bar, yes not too unusual but this is Newport. However go down the stairs to the Skinner Street bar situated in the oldest part of the pub and you will find a fridge stocked with bottled beers from Celt Experience, Brains and Rhynmney Breweries. There are also plans to have beer served straight from the barrel in this part of the pub as well as to increase the catering options here.
In the meantime the pub is running a competition for a customer to create their own real ale at Otley Brewery.
The new people in the pub have also started to ban some of the 'characters' that inhabit Newport pubs - a good start, think Richard in the Pen & Wig is up to 60 people he has banned so far! 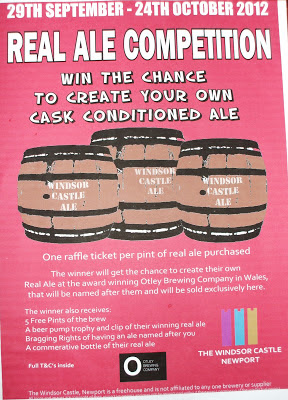 Its close to the bus station so easy to find!

The Windsor Castle does not smell of fish.