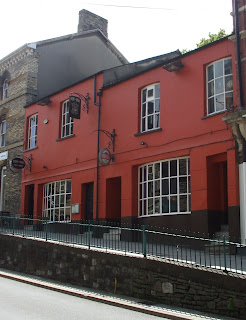 To celebrate the Newport Food Festival, the Pen & Wig on Stow Hill will once again be hosting a beer festival in the upsatirs room. As well as the fllowing beers being, a range of ales from Tiny Rebel Brewery will be on the downstairs bar together with ciders from Gwynt Y Ddraig. The new Tiny Rebel beer 'Kookie', a 6% Double IPA will be on the bar as well as on the Tiny Rebel bar on the Riverfront.
The Festival kicks off on Friday 5th October at 1600 hrs and continues all day on Saturday 6th.

Dark Star Brewery
The Dark Star Brewery of Sussex have been brewing since 1994.
Dark Star Hophead (3.8%) Pale golden ale with a floral aroma. Full bodied and flavoured. An excellent session ale.
Dark Star American Pale Ale (4.7%) Both yeast and hops are imported from the USA to make this light, dry and crisp hop explosion of a beer.
Dark Star Revelation (5.7%) Four different hops are used in the mash with another used for dry hopping. A powerful blend.
Dark Star Summer Meltdown (4.8%) Thirst quenching summer beer with a hint of ginger and spices.

Liverpool Organic Brewery
Established in 2008, its a miracle the locals have not pinched the brewing kit!
Liverpool Organic Honey Blond (4.5%) English organic malt and hops are used in this new addition to the range. A slightly sweet but very drinkable ale.
Liverpool Organic Shipwreck IPA (6.5%) An Indian pale Ale with intense citrus flavours.
Redemption Brewery
Brewing in Tottenham since 2010, their beers are good enough to start a riot!
Redemption Trinity (3.0%) Malty and bitter. Surprisingly good drink for its low alcohol strength. Well worth a try.
Redemption Urban Dusk (4.4%) Chestnut premium bitter with a caramel and fruit flavour.

Devilfish Brewery
Brewed near Frome in Somerset by Iain Masson, who also brews at the Kite Brewery in Carmarthenshire.
Devilfish Gold Devil (4.2%) A light golden ale with a strong taste from this new brewery located close to Bath.

East London Brewery
Brewing in Hackney since 2011
East London ELB Pale Ale (4.0%) A light and pleasant session ale.
East London Nightwatchman (4.5%) This red tinged beer has a dark and smooth taste with a lingering hop aftertaste.
Hackney Best Bitter (4.4%) A very traditional style of ale for those who like their beer the way it used to be brewed

Windsor & Eton Brewery
Established in 2010 and brewed within sight of Windsor Castle
Windsor & Eton Conqueror (5.0%) .Rich, complex and distinctive. This Black IPA is a blend of five malts and two hops.

Raglan Cider Mill
Traditional cider made on a Monmouthshire farm.
Raglan Dry. Distinctive and dry. Winner of the 2011 Hereford International Cider award.
Raglan Medium Cider A popular cider that has a pronounced fruitiness.