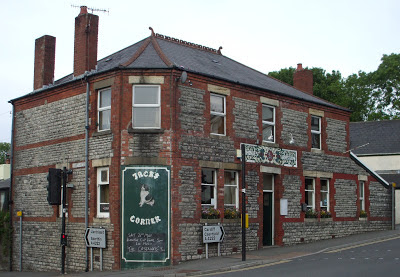 The Edmondes Arms is a stone and brick built pub on the eastern edge of the historic market town of Cowbridge, the stone is the local light-grey Jurassic limestone. The pub was built in 1899 and the date features on the outside of the building together with the coat of arms of the original owner, the Reverend Thomas Edmondes, a major landowner of the town in the nineteenth century. This building replaced two older pubs, one also called the Edmondes Arms and the other called the Red Lion, these were demolished after Hancock’s Brewery bought them in 1895. Both these pubs were in existence in 1835. The pub windows all feature a stained glass panel with ‘Bar’ and 'Smoke Room' on them. The corner doorway has been blocked up and is now called ‘Jack’s Corner’ after a dog that lived at the pub. The present-day doorway leads to a small entrance hall with the bar to the left and the lively games room to the right. The games room features a pool table, darts board and a newspaper cutting with photographs of why ‘Jack’s Corner’ was named. The games room and the rear yard were the site of the original Edmondes Arms.

The bar features wood panelling and rugby memorabilia and there is an original cast iron fireplace to one side. The bar is approximately the site of the former Red Lion pub. A door to the rear of the bar leads through to the lounge which, in turn leads to an outside area with seating. The lounge features a piano as well as more seating. Unusually, the Edmondes Arms still retains most of its original internal layout and has not had dividing walls knocked through to make the pub open-plan.

Wye Valley Hereford Pale Ale and Hancock’s HB are the two permanent real ales on the bar, with occasional guest beers such as Sharps Doombar making an appearance. Regular live music events are held at the pub.

Nice place, only drunk there a few times but the Wye Valley HPA was on top form each time.