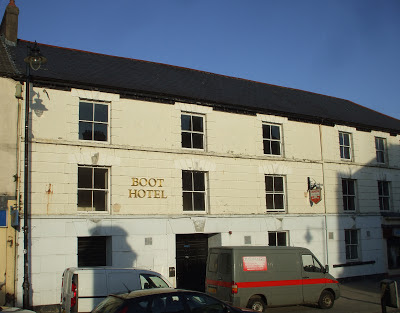 The Boot Hotel in Aberdare is one of those pubs that has definetly seen better days. I've never been in there, in fact it always appears to be closed when I've been past it. The pub did lose its alcohol licence and subsequent appeal back in 2011 "due to the unacceptable level of crime and disorder". That licensee was a certain Anthony Chidgey but his successor and no doubt relative Jason Chidgey has actually achieved more than his predecessor by being sent to prison for 15 months after admitting perverting the course of justice by not reporting the death of a customer at the pub for 4 days as he did not want to damage the weekend trade. The case only came to light when the cleaner went to the police the day of the funeral after her conscious got the better of her. An Aberdare version of the Kipper and the Corpse was played out for 4 days.
Now there is an old joke that there has never been a series of CSI Aberdare as no one there has any teeth and all the people are genitically the same but after reading about this case; a suspicious/unexplained death in a pub which no doubt involved the police and the police surgeon, questions need to be asked about the doctor who certified the death and how the hell a four-day old body was mistaken for one that had died recently? This did happen in late January 2012 so the cold would have slowed down the decomposition but even so 4 days?
More coverage:
Wales Online cover the story here
TNT Magazine
Anorak
Daily Mail
Sun