Are pub conversions to supermarkets always a bad idea? 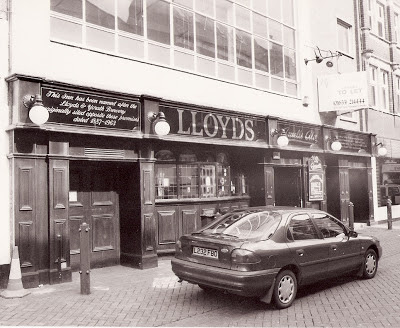 Following on from the comments posted yesterday on this article here I'd thought I'd do another story on pub conversions to supermarkets.
Pictured above is the former Lloyds pub on Cambrian Road, Newport. Nothing to do with the faction of Chaverspoon that have the name today, this was a former Ansells pub that was named after a former brewery they took over and closed that stood opposite. Ansells also had their area offices above the pub. Now this was never a great pub, beer quality was appalling and in its final years the place was renamed Jarcals and appealed to the nighttime crowd of drinkers in the 'Port. When it did have real ale, the choice was Ansells Best and for a while Burton and eventually Tetleys, not a great choice and not a great pub. Its not that a pub on this road could not succeed, further up Cambrian Road Chaverspoons opened their first pub in Wales and the John Wallace Linton is still there to this day, with their indifferent staff being rude to customers and no doubt serving piss-poor beer etc. The blame for the failure of this pub was down to the brewery and later the pubco.

The building that was Lloyds today has been converted into a Tesco Express, so the beer quality and the range has improved drastically, along with the clientele. It only became a pub in the 1980s so no big loss to Newport. A not very good pub with poor quality beer and a limited range has been swapped for a shop and off-licence with a far better range of products - the consumer wins all around!

Below is the picture from Google Streetview, the building is in the process of being converted into a Tesco Express.