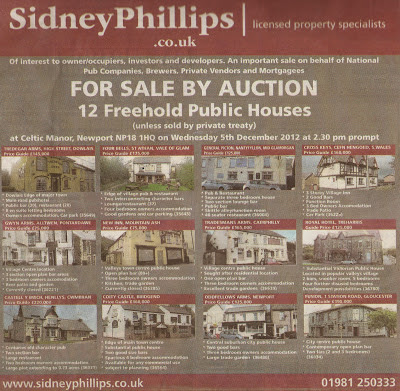 The next local pub auction will be on Wednesday December 5th at 1430 in the Celtic Manor Hotel, Newport. Twelve pubs are up for auction as I write this, this may well change so check the Sidney Phillips website for updates. A couple of cheap ones on this list, with the guide prices starting at £75k – although as these pubs have been in pubco hands for a number of years the buildings will no doubt need a lot spending on them to bring them up to an acceptable standard.

Tredegar Arms, High Street, Dowlais, Merthyr Tydfil, GP £145,000
Large pub on the road into Merthyr, formerly a Rhymney/Whitbread Brewery pub, quite large, car park, lounge, bar, letting rooms. The only let-down is the pub being on the outskirts of Merthyr Tydfil.

Four Bells, St Athan, Vale of Glamorgan, GP £175,000
One of only 2 pubs left in the village, the Four Bells is an ex-Hancocks/Welsh Brewers/Mercury Taverns pub, with a garden, car park and 2 bars. Since the closure of the RAF base at the village the custom has declined somewhat.

General Picton, Nantyfyllon, Maesteg, Mid-Glamorgan, GP £125,000
Large, end-of-terrace locals pub with lounge bar, public bar, restaurant and skittle alley/function room as well as a separate 3-bedroomed house. All that for a relatively low guide price, well it is near Maesteg and it looks like the only smoking solution is the street, not ideal.

Tradesmans Arms, Machen, Caerphilly, GP £165,000
Pub situated on the main road through Machen – there is a lot of competition locally, although the Ffwrwm Ishta was shut the last time I went past it. Described as 'Sought after residential area' so change of use may be on the cards here.

Castell Y Bwch, Henllys, Cwmbran, GP £220,000
Situated in a rural location between Newport and Cwmbran, this pub once had a good reputation for food. A large plot, 0.73 acre so this may attract residential conversion.
Coity Castle, Bridgend, GP £160,000
Situated just off the town centre, near to the railway station. Looks like the only smoking solution is the street so a conversion to restaurant maybe on the cards.

Oddfellows Arms, Maindee, Newport GP £125,000
Dating back to 1854, this detached pub is set in the residential area of Maindee. Outside smoking area at the rear, two bars, the one thing letting this pub down is that there is a Chaverspoon's in the area. Other nearby pubs – the Star, the Globe, the Royal Albert are also closed at the moment.

Fusion, 1 Station Road, Gloucester GP £195,000
Formerly the Prince Albert pub, this street-corner local near the railway station looks like it has seen better days. Smoking area appears to be the street only.

If you were to believe some people, put a range of craft kegs on at £4 a pint and the customers will come flocking...