A beer brewed earlier this year for the CAMRA Great Welsh Beer & Cider Festival has been relaunched today in bottle format in selected Tesco stores.


Created by Simon Martin, aka Mr Real Ale Guide, this India Pale Ale was inspired by the ‘IPA revolution’ across the pond. The boy from Barry has used a trio of hops from the US in this pale coloured ale, which is bursting with citrus aromas. A unique smooth malt taste upfront is finished off by a vigorous bitterness and a ‘tidy’ clout of citrus and berry hop flavours. At 6% its ideal as a breakfast beer (joke!) 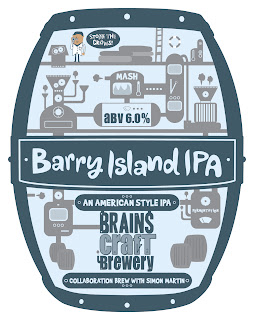 There doesn't seem to be anywhere in North Wales!