Labour Party takes the piss to follow the “Save the Pub” bandwagon. 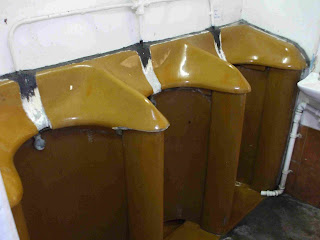 Above: The unique urinals of the Vulcan

Euro Election leaflets are dropping through the letter boxes of voters throughout the UK at the moment, but voters in Cardiff may be a bit surprised to see the spring edition of the Cardiff Mail, the local Labour Party rag, with a “Please support OUR campaign”caption, to Save the Vulcan. Hang on a bit, Brew Wales regularly drinks in the Vulcan and attended a public meeting to try and save the pub and this is the first time he has heard of widespread support for the Campaign from the Labour Party. Now the Save the Vulcan campaign is non-political, attracting a broad spectrum of political views, though the Chair of the Campaign to Save the Vulcan does work for the Liberal Democrats. Nothing wrong with that, Brew Wales has often been known to have the odd jar of ale with Lord Dholakia or the Member of Parliament for Montgomeryshire. What is annoying though is that when the original plans for the demolition of the Vulcan were passed by the Cardiff Council, it was being run by the Labour Party and not a word of disquiet was heard from those Labour Councillors on the Planning Committee. Suddenly, the Labour activists can see a popular Campaign to save a successful pub is winning public support and decide they are going to attempt to claim the Save the Vulcan Campaign as their own.

Now on another site, Guido has written about the “Curse of Jonah Brown”, where the Prime Mentalist has often come out supporting some cause or sports team which then go on to fail. Last week as issues of the Liebour-published Cardiff Mail were dropping onto the carpeted hallways of Cardiff voters, it was announced in the South Wales Echo that the Vulcan would be closing on the 25th June. So the Curse of Jonah Brown has now been extended to any cause to which his failing party attempts to support.

Meanwhile, the Culture Minister of the Welsh Assembly, Alun Ffred (so good they gave him 2 Fs) Jones, seems unable to come to a decision on whether to save the pub or not. No Doubt he is too busy window-licking at the view of Cardiff Bay and Penarth from his office, rather than trying to save an important part of Welsh cultural life.

Even failed UK politician and professional Euro gravy-train milker Lord Kinnock of Bedwetting has come out in support of the Vulcan. Mind you he once said that his favourite pub was the Fountain in Troedrhiwgwair, South of Tredegar, a pub which made the toilets facilities in the Vulcan seem the height of modernity.

Brew Wales does not often do politics any longer, despite, in a previous life, once working for a London MP, however the cynical, bandwagon-following attitude of the Cardiff Labour Party is something that deserves to be treated with contempt and hopefully on June 4th the voters will know where to put their X on the ballot paper.

Brew Wales will not be voting for the party that has a teetotal Scottish Presbyterian, pub-hatting, nail chewing, cyclopean, snot-gobbling, unelected, trouser-pissing, bisexual (References: Lords Mandelson and Levy), incompetent, bunker-dwelling troglodyte from the tundra beyond Hadrian's wall as a leader. Indeed any other party, with the exception of the BNP, who could not even make a Hornby train set run on time, would be worth voting for other than the disastrous Labour Party and their Son of the Manse.

With 6 pub closures a day now occurring, it's time for change, so let's all give Gordon the message on Thursday and don't vote Labour.

Labels: Cardiff Pubs, Save the Pub, Save the Vulcan

Brew Wales needs to get its facts staright:Cardiff Council was controlled by the Liberal Democrats in 2005 (not Labour) when the Council sold the pass on the Vulcan and handed its fate to property developer Mr Derek Rapport when granting him outline planning permission for the site. It is only latterly the Liberal Democrats have developed a passion for the pub.
It is Mr Rapport who has the fate of the Vulcan in his hands. Suggest you direct your concerns to him instead of venting your spleen against the Labour Party. On our own we cannot save it, however many illustrious backers we have.
Jenny Rathbone, Save the Vulcan campaigner.

And for how many years before that did the Lieber controlled Cardiff Council refuse to recommend listing the Vulcan? This has been ongoing for 10 years and it is hypercritical of a failing party such as yours to try and follow the bandwagon to Save the Vulcan and claim credit for it. Your party is responsible for 6 pubs closing every day. Do you really believe that you are electable? If so you are as deranged as your leader, the teetotal Son of the Manse.

I thought they had already decided to knock this down for mid June.. I can't understand how places like this get demolished and stinking shite tips in Newport full of the Chav Scum safe brigade are allowed to stay

Ah Ms Jenny Rathbone. You do exist then. Interesting how you have time to comment on blog articles but not to reply to my letter regarding the Vulcan dated 29th April 2009.

Are you planning to respond?

I'm also intrigued that you call yourself a 'Save the Vulcan campaigner'. You have not once approached us asking to be involved in the campaign (like another 6,500 people have). Stop jumping on bandwagons. If you want to get involved and do something useful, have some guts and send me an email (rachelthomas753@hotmail.co.uk), and we'll talk about what we can do.

'Can you believe the nerve of these Labour flunkies?'

Except I can. Over and over again the show that they are divorced from reality.

If the Vulcan is still there for my 'Welsh Bloggers In The Pub 09' in July, I know for a fact it will have sod all to do with 'campaigners' like Jenny Rathbone.

As a Tory, I have been more than happy to help with the save the Vulcan campaign (providing photographs mostly), as the Vulcan is a pub I frequent on more than a weekly basis.

I had a good idea from the start of the loose coalition of people working on the campaign and I'm just glad that some people cared enough to try and save the pub I love.

The pub is much more than a building - what are they going to do?

Their banter on Sunday lunchtime's is not to be missed.

As the slogan says "God Have Mercy - Save the Vulcan"