Bass was once the most popular real ale in Britain with over 2 million barrels a year being brewed but today it is rumoured that only around 100,000 barrels are produced a year, probably a lot less. It is owned by the worldwide brewer InBev, makers of Stella and Budweiser but brewed by Marston's in Burton-upon-Trent. Recently Brew Wales had the opportunity to question an Inbev Executive and on asking how much the marketing budget was for Bass, was told zero. That's correct, the marketing budget for Bass is zero, zilch, nothing. So Inbev own the name of one of the most iconic beers in the world, yet have no interest in marketing the product what so ever. Hardly surprising as we live in a world of where the mega-breweries are controlled by accountants and not brewers and Bass is a beer that benefits from good cellar work, not something a keyboard-puncher at a mega-brewer is interested in. A stable brewery-conditioned product is all that these people are interested in.

The Bass Red Triangle was the first trade mark ever registered in the UK in 1876 and by 1882 bottles with the red triangle on them were immortalised in Manet's Bar at the Folies-Bergère. The pale ale from Burton had achieved world-wide fame.

Bass used to have legendary status, not least for the Vesuvial effects of drinking copious quantities of the said beer that has been brewed with the gypsum-rich waters of Burton-Upon-Trent. The effect of calcium sulphate on the digestive system of the human body cannot be understated but the production of hydrogen sulphide gas as a result of the digestion of Bass has been known to make the staff toilets of many an office unusable by fellow workers until the sulphurous volcanic aromas have dissipated.

Pubs in Newport were once renowned for the quality of their Bass; the Lord Raglan on Commercial Street (demolished in the 1970s), followed by Conti's, the Royal Albert and the Queens Hotel were all popular Bass pubs. Conti's and the Queens were not even owned by Bass but served their beer. Nowadays only the Pen & Wig serves Bass in the City Centre. A few may say that the quality of Bass went down hill in the 1970s when, in a cost-cutting measure, the beer was fermented in giant conical fermenters rather than the traditional Burton Union sets, a method of production unique to Burton which involved wooden barrels linked together and helped produce the unique flavour that made Bass the famous beer it was. 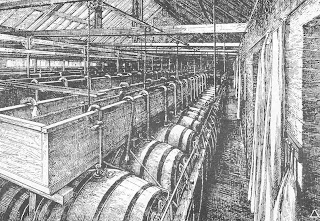 Bass is still a good beer but one that benefits from good cellar work. Bass even tastes better served gravity than on a handpump – go to the Star in Bath or Bessie's (Dyffryn Arms) at Pontfaen if you don't believe me. So what is the future of Bass, as the owner Inbev does not have an interest in promoting it as a brand? Well if they were to sell the brand, which has to be brewed in Burton, would it not be better to see this beer being owned by Marston's and perhaps even being brewed in the union system again as it was before the 1970s? A better future than slowly dying out through lack of promotion by a multi-national mega-brewery.

More on Bass at Wikipedia here