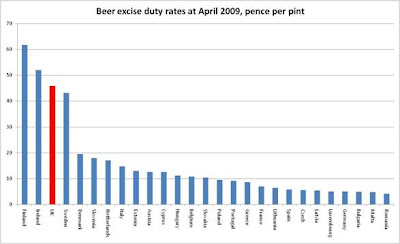 Graph and data from the British Beer & Pub Association.


The Axe the Tax Campaign – launched by the British Beer & Pub Association and the Campaign for Real Ale at the end of last year – is calling on the Government to reduce tax on beer, with six pubs closing every day. More than 70,000 people have joined or supported the campaign, including over 200 MPs.
Alcohol duty was increased by 2 per cent above inflation in the Budget last month following a massive 18 per cent increase in 2008. This year’s Budget increase is being debated in Parliament as part of the Finance Bill.
Commenting on the figures, David Long, the BBPA’s Chief Executive said
“These figures show that British beer drinkers are being taxed at rates far in excess of most of their European counterparts.
“The result is that pub closures are now running at six a day, with thousands of jobs being lost in the British beer and pub industry. A great British institution is under serious threat and yet the Government appears to be determined to ignore concerns expressed by consumers, the industry and politicians of all parties.”
“With elections to the European Parliament taking place next week, beer lovers will note the extent to which they are being taxed above and beyond other consumers in the rest of the EU.
“We hope that those MEPs elected as a result of these elections will stand up for British beer lovers and the great British pub.

Well, it seems the teetotal Prime Mentalist is hell bent on completing the plan of his bible-bashing anti-alcohol father and close as many pubs as possible. Since Labour have come to power in 1997, over 6000 pubs have closed, with the current rate of 6 pubs a day shutting and a new survey out today shows one of the reasons why; in the UK we have the third highest beer tax in Europe. Something that my local Member of Parliament Jessica Morden continually fails to understand. Still when you are a New Labour apparatchik anything will do so long as the Party line is taken. 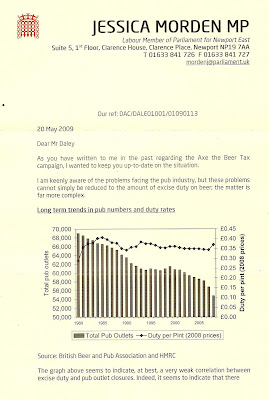 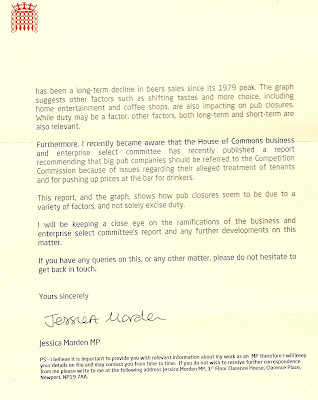 From the graph above a direct correlation can be made between the sharp drop in pub numbers and hike in beer duty imposed by this government in the last few years. I know which party will NOT be getting my vote in the elections on Thursday.