Messiah Spotted in Head on Beer

Above: the Last Supper can clearly be seen in this head

Following on from the story where a couple from the Rhondda saw an image of Charles Manson Jesus Christ in a Marmite jar, reports have been coming in from pubs across South Wales that the Chosen One has been appearing in the heads on pints of beer. The tight, creamy heads on pints of Brains, HB and Felinfoel are said to be an ideal medium on which the features of the Messiah can materialise. 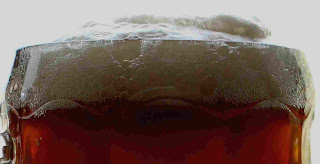 Above: Is that Jordan appearing over the brim?

Reports of appearances of mystical figures have been heard from the Tundra of Merthyr Tydfil to the low lands of the Gwent levels and one explanation for these events, according to a newspaper editor, is that there is “Bugger all real news apart from MP expenses so spotting Jesus in your pint is something we all can hope to see and fill our newspapers with”. 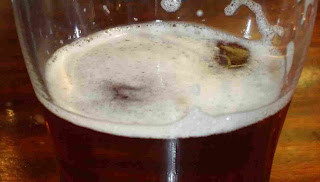 Above: Moses makes an appearance in this pint glass

According to Ivor Davies, a customer at the Heroin Addicts' Arms in Aberpobolycwm , “I;ve seen Jesus in nearly every pint. I've also seen Jordan and Barack Hussein Obama in my pint. The more I drink the more images I see and I can't wait to get my next pint in to see which mystic figure chooses to appear in the head of my pint”.

But according to a barmaid in the Addict's Arms, “It's not the Messiah but a very dirty glass”. 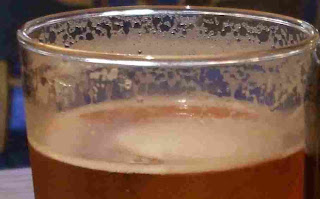 CAMRA, the Campaign for Real Ale, have denied that the appearance of images of the Messiah in pints is a publicity stunt for the forthcoming Great Welsh Beer & Cider Festival at the Cardiff International Arena and have also denied that the Second Coming will be held during the Beer Festival with Jesus pouring the first pint of Brains. 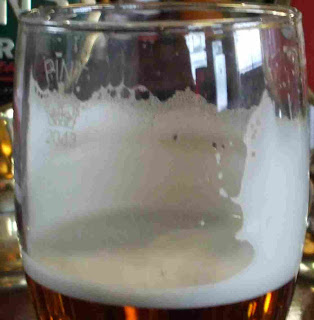 Above: Has the prophet Mohammed appeared to beer drinkers in Wales in a beer glass?

UFOs have also been sighted in Cardiff over the past few days and plagues of locusts, serpents appearing and fish falling from the sky are all expected to occur over the next few weeks. Well another series of Torchwood is due to broadcast soon.

The Cynical Dragon also has a take on this, though he claims the Marmite Messiah is in fact Gene Simmons.

I was having a quiet G&T last night before going to Fagins Chop and Ale House to photograph the Monte Dons when I spotted Moses and Elijah in my tonic.

It first I though it was a trick of the light or maybe too much tonic but then John the Baptist appeared.

Thanks for letting me shre this,

The top one looks like the prophet Mohammed, just saying is all.