Mountain Rescue at the Great Welsh Beer and Cider Festival 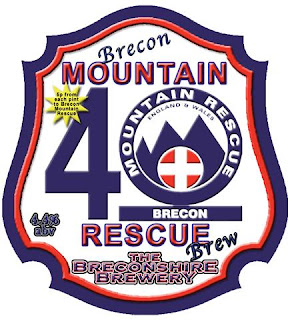 The designated charity for the Great Welsh Beer & Cider Festival this year is the Central Beacons Mountain Rescue Team and to celebrate 40 years of mountain rescue, the Breconshire Brewery will be launching a special ale at the festival next week, with a donation going to the charity for every pint sold.
The 4.4% ABV beer is described by Breconshire Brewer 'Buster' Grant as "a bronze coloured ale, with smooth fruity flavour, and a building hoppiness that leaves a refreshing, long dry aftertaste".
The Central Beacons Mountain Rescue Team began 1959, when Jack Powell a Police Sergeant in Merthyr Tydfil, was asked to bring together some outdoor people to form a team. An increasing number of people were getting into trouble in the Brecon Beacons. By 1963 members included Civil Defence Corp thus was formed the Police Civil Defence Mountain Rescue Team.

One of the first incidents the team were called to, was for a Vulcan Bomber on a low flying sortie which hit the top of Fan Llia and crashed onto the mountain on the other side of the valley. This was an extensive search area conducted in poor conditions, which involved RAF Teams from England and Wales, volunteers from Brecon and our team. The remains of the Aircraft were located with the aid of a helicopter and the Team members had to assist in the recovery of the bodies.

The Aberfan Disaster struck in 1966 and members of the team who were part of the Civil Defence Corp were involved in this major operation, all played an important part with Jack as the Site Rescue Officer.

In 1968 the members of the Police Civil Defence team became the Morlais Mountain rescue team.

The team is a founder member of the South Wales Search and Rescue Association (SWSARA) and is an affiliated to the Mountain Rescue Council for England and Wales. By 1996 the team changed its name from Morlais to become the Central Beacons Mountain Rescue Team.

Photo above right and details taken from their website. Above: Some of the team pictured outside the Cardiff International Arena Last Year