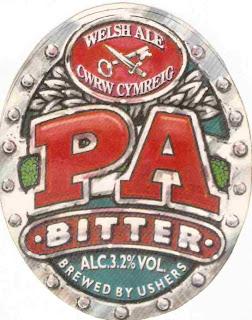 Ushers Welsh Pale Ale _ marketed as 'Cwrw Cymreig' or 'Welsh Ale' in the 1990's this con-trick of real ale was actually brewed by Ushers of Trowbridge, Wiltshire, England, for their extensive estate of pubs in Wales. Weighing in at 3.2% ABV, this real ale was short-lived, unpopular and bland. Complaints to Trading Standards went unheeded as there was no Protective Geographical Status (PGI, PGO etc) for Welsh beer, allowing any brewer in the world to brew and market a beer as 'Welsh'. It turned out to be unpopular with real ale drinkers due to being bland, tasteless and low in alcohol and so was soon dropped from Usher's pubs.

Would any ex-Ushers employee who reads this blog like to claim responsibility for trying to con Welsh drinkers?

Why can you not support the fantastic ales that Evan Evans produce rather than excavate old rubbish like this?

The Evan Evans beers? From the guy who was kicked out of SIBA, so I've heard...

Brew Wales also hears that a certain West Wales brewer has been booted out of the SIBA for theft of other brewers casks. However the thief only moans if Brew Wales does not publish his replies so its easier to let the hoon make a fool of himself online than have the Clown Prince of Welsh Brewing waste 40 minutes of my life with his ranting phone calls again.