Welsh microbreweries to be showcased in Swansea 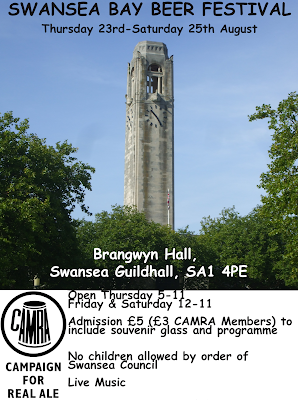 It will showcase more than 100 real ales along with ciders and perry. Many of the ales come from small microbreweries that have emerged all over Wales recently to quench a consumer thirst for new and original beers.

One of the microbreweries leading the revival in real ale drinking across South Wales is the Gower Brewery, which launched in November last year.

“We thought there was a gap in the market for local cask ales and we’ve been amazed by how quickly it’s taken off,” said Chris Stevens, of the Gower Brewery.
Chris, licensee of the King’s Head in Llangennith, set up the brewery with Chris Mabbett of the Greyhound pub in Llanrhidian, which is where the brewing takes place.

Another enterprising individual introducing local ale to South Wales is Jay Thomas. He set up Neath Brewery - the first local brewery in the area for more than 40 years. His beers have no added sulphates, chemicals, flavour-enhancers or preservatives, which helps produce ales with real character and flavour.

Eight lovingly-crafted cask ales are also finding their way into local pubs from the Kite Brewery at Gorslas, which started production in 2010. Head brewer Iain Masson has 30 years’ experience of making great beers, having worked for Greene King and Hardy and Hanson, among others, but is now enjoying himself brewing beer brewed with real hops nad not hop oil.

Other new Welsh microbrewers featured at the festival include Tiny Rebel from Newport and Cerddin Brewery, which is based in Maesteg

Colin Smith, chairman of the Swansea branch of the Campaign for Real Ale, said: “It’s very encouraging to see new local microbreweries doing so well. At a time when the sales of keg beers are declining, sales of real ales are holding up well and finding new fans. For example, the number of 18-25-year-olds and number of women drinking cask ales has doubled since 2008.”

The Swansea Bay Beer Festival is open from 5pm-11pm on Thursday, 23 August; and from noon to 11pm on Friday, 24 August and Saturday, 25 August. It is being held in the Brangwyn Hall, St Helen’s Road, Swansea, SA1 4PE.

The festival is organised by CAMRA and sponsored by Cardiff-based Brains Brewery, who will be showcasing their new range of original craft beers.

Entry is £5 per day and that includes a glass and the festival programme and tasting notes.

There will be live musical entertainment on all days.
Beer and cider list is available here