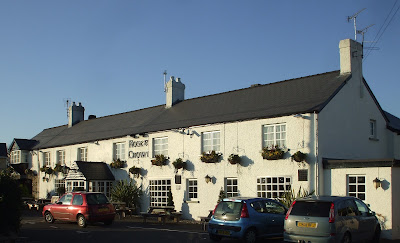 
Open All Day
The village of Nottage with its medieval origins is today part of Porthcawl, the nineteenth and twentieth century developments of the later town have now encroached on this once separate and older settlement. A navigable stream once lead to the sea from the village and the Duffryn-Llynfi tramway and later railway once ran through the village and under the village green.

Situated facing the village green, the Rose and Crown is unusual in that it was originally built as a row of stone cottages in the nineteenth-century, two of which became pubs, the Rose and the Crown, before the entire row was converted into one pub.

To the front of the pub there is a small car park and outdoor drinking area which faces onto the village green.

The white-washed building features a slate roof and a weather-boarded entrance porch which leads to the interior of the pub. The dividing interior walls of the original buildings with their large fireplaces have been kept which enables the pub to offer different distinct and unusual bar areas. The bare stone walls add to the traditional atmosphere of the Rose & Crown. Old photographs of the surrounding area decorate these walls. The old cottages have been extended at the rear and this new extension forms a substantial part of the pub today.

The left-hand side of the pub features a traditional bar area whilst the right hand-side features a restaurant, although food is served throughout the pub. Real ales are from Brains with Bitter, SA and Rev James being served together with their seasonal guest beer, at the moment it's the Tour de France themed 'Le Peleton'. The pub is a regular entry in the CAMRA Good Beer Guide and hosts a beer, cider and sausage festival once a year. There is also an extensive wine list or alternatively Brains Black is available.

As welll as the front outside drinking area there is another outside area with more tables at the side.

The Rose & Crown hosts regular live music and there is also a function room available free of charge. The pub also offers accommodation.

Food is served all day from a traditional but extensive menu with a focus on Welsh ingredients being used wherever possible and a separate lunchtime menu.