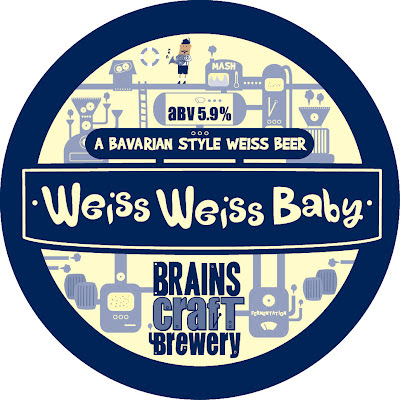 There is no truth in the rumour that Vanilla Ice was brought into brew this beer! However the staff were under pressure to come up with the name for this beer!

The craft brewery has enabled Brains to experiment with a diverse range of cask, keg, and bottled beers, and trial a wide range of different beers, including Colonel Williams, and Barry Island IPA.

Following the success of a number of unique beers to come out of the craft brewery, Brains continues to offer an exciting and diverse range. The latest addition is a traditional Bavarian style ‘white beer’ brewed with malted wheat and Hallertau Tradition hops. Naturally cloudy, Weiss Weiss Baby uses distinctive Weissbeer yeast to produce a light, refreshing beer bursting with fruity banana flavours and spicy cloves.

Richard Davies, Sales and Marketing Director at Brains, said “Weiss Weiss Baby is very different to anything we’ve produced before. It’s a perfect keg beer and customers can try it in five of our pubs. But it’s also great in cask – which is why we’ve chosen to take it to the Great British Beer Festival (7th – 11th August), where it will feature alongside seven other Brains beers.”

Bill Dobson, Head Brewer at Brains, added: "We’ve seen in our own pub estate that customers are looking for an eclectic range of beers on the bar. The craft brewery is allowing us to experiment with different techniques, ingredients and styles – from India Pale Ales through to continental style beers. It’s an exciting time for the brewery."

Weiss Weiss Baby will be available in keg from August 8th in Cardiff at Terra Nova, The Yard, 33 Windsor Place, The Pear Tree, and The Lime Tree in Chepstow.