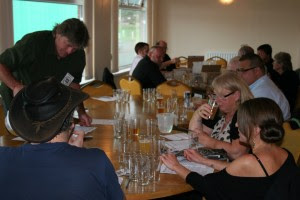 Above: Beer Academy sommeliers leading a panel of Judges in the ‘Welsh Pale Ale Competition

The beer style was brewed by 15 Welsh breweries and was put together by AWIB to typify a drink consumed historically and today within the country of Wales. Beer writer Melissa Cole also assisted AWIB during the category preparation.”It’s always exciting and inspiring to see brewers grasp the roots of their local brewing history and I very much look forward to seeing and tasting the different interpretations that will be available within the guidelines. Some people think defining styles is like putting handcuffs on brewers but, in my experience, it can bring out the both the scientist and the alchemist in them to produce something truly lip-smacking”

Breweries such as Brains, Welsh CAMRA Champions ‘Heart of Wales’, North Wales’ Purple Moose and many more were involved in the event. But the overall winner, judged by a Beer Academy led panel of experienced judges was Conwy ‘Honey Pale’. The runner-up was local brewery and joint hosts The Celt Experience with their Welsh Pale Ale.

The festival also featured a number of other exciting beers from around Wales including new breweries Tiny Rebel and Pixie Spring, who both excited people with their high gravity and IBU beers. 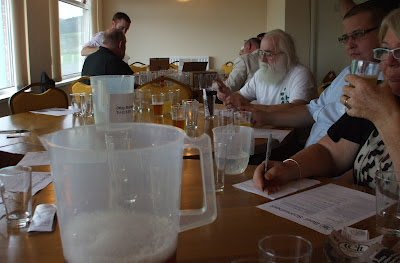 Local Brewer, Beer Sommelier and one of AWIB directors Tom Newman commented “The event proved a great success with promotion of both Welsh beers and unity as a beer loving nation. We hope to make this an annual occasion. Profits from the event will be shared between AWIB and Macmillan Cancer charity”.

AWIB Chairman Buster Grant also added “It has happened now and we have set a benchmark for an annual event. Hopefully as a brewing nation we can also gain some recognition for a genuine beer style’”

Ric Brown said, “As sommeliers it is part of our job to enthuse and educate people in the ways beer can be drank with diffeent food, and this was what today was about”

The venue for next years event is likely to remain at Caerphilly RFC and will probably be the same weekend in August.