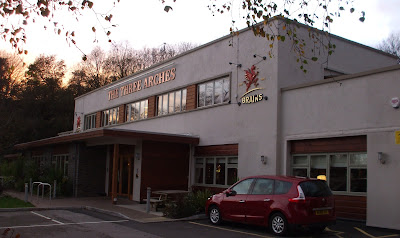 Opened on the day of the Queen's Coronation in 1953, the Three Arches pub celebrates its Diamond Jubilee this year. The pub takes its name from the arches of the nearby railway viaduct which crosses the valley in which the pub is built in.

The Three Arches was designed by the famous Welsh architect Sir Percy Thomas who also designed other Brains pubs such as the Birchgrove, Westgate and the Culverhouse as well as Swansea Guildhall. However this first purpose-built post-war pub of SA Brain is flat-roofed and modernist in design, as opposed to the distinctive 1920s designs of Thomas' with their flowing roof-lines. The Three arches underwent a major refurbishment in 2010 which created a lot more space in the pub.

This large pub is set in its own grounds and has a car park at the rear, alternatively, the pub is a short walk downhill from the Heath railway stations.

The Three arches are shown on the pub sign and the name on of the pub is emblazoned in copper-coloured letters on the front of the pub, which catch the light from the setting sun in the afternoons and evenings. The central entrance foyer features large double doors with large glass planes in them allowing plenty of light to enter and a flagstone floor, this leads to the interior of the pub with a dining area on the left and the public bar on the right. The dining area is surprisingly large with a fireplace and dividing walls separating it into distinctive areas. One area features bookshelves whilst others lead onto the beer garden with its tables and chairs. The dining area features a long, straight bar whilst the public bar features a curved bar, both bars feature five gleaming chrome handpumps serving real ales from Brains Brewery with Bitter, SA, Dark, Rev James and the

Brains seasonal beer, currently British Summer, a light hoppy ale of 4.1% ABV. Both areas are decorated throughout with pictures of old Cardiff, including some old photographs of the railway line to Caerphilly which runs near the pub over the viaduct. The bar area features flat-screen televisions which show sporting events, although the pub is big enough to find a quiet area if you do not wish to watch sport. Free newspapers are available for customers to read.
Food is served all day from a traditional menu together withchalkboard specials featuring 'Pie of the Day' and 'Curry of the Day', as well as a grill menu.