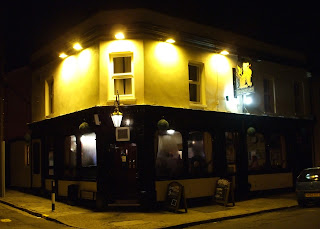 
The Golden Lion is a two-story Victorian building on the corner of
Glebe and King Streets and was one of the original ten pubs built when
this area of Penarth was constructed in the nineteenth century. The
pub was originally owned by Hancock's Brewery, then was taken over by
Welsh Brewers but was recently bought by the locally-based JW Bassett
Pub Company who have leased the pub for a number of years previously.
The frontage consists of large windows and black painted wooden beams
with a decorative pub sign of a golden lion with the words 'Serving
the finest ales and lagers' written underneath. The entrance doorway
is on the corner and this leads to the small and compact bar area.
Polished wooden floorboards give way to black and red Victorian floor
tiles approaching the tall wooden bar counter.
Three gleaming brass handpumps serve real ales and a cider, the Golden
Lion is a rare local outlet for beers from Wales oldest brewery,
Felinfoel of Llanelli and also a rare local outlet for one of Wales'
newest breweries, Kite of Gorslas. The ciders and occasionally a perry
are from Westons of Much Marcle, a traditional Herefordshire maker.
All the drinks are served in branded glassware with the beers from the
Kite Brewery being served in their own oversized vessels. 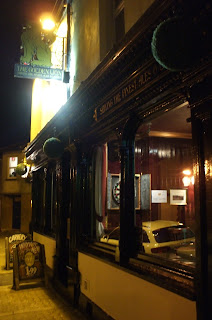 A large real fire is a feature of the bar area and to the left hand
side of this is a passage into what once was the next door house, now
encompassed into the Golden Lion as part of the pub. This part of the
pub features a dart board as well as more seating. To the rear of this
room is a doorway that leads to a courtyard which features as the beer
garden and smoking area. An outside drinking area is unusual to find
in Penarth and this one is even equipped with its own weatherproof
flatscreen television. Live sports events are a feature of this pub
and there are 6 plasma screens in total, including one for 3D
broadcasts.

Food is served all day with grills a speciality and a carvery on
Sundays. One of the menu items is a 32oz mixed grill for under a
tenner. A chalkboard in the bar gives details of a Pick 'n' Mix combo
or 'Welsh Tapas' which prove very popular during major sporting
events. Real Crisps and pickled eggs are also available.
The Golden Lion is a thriving, friendly community pub with regular
charity events and drinks promotions on Monday nights and a poker
night on Tuesdays. Free WiFi.