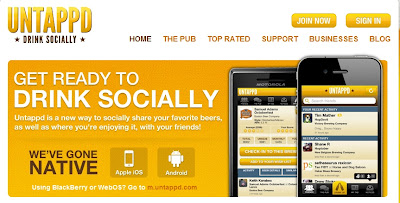 Untappd has been running for about a year now and I joined shortly after it came out so having used it for about a year I'd thought I'd better write something about it.
Untappd is a logical extension of social media into the world of drinking, we already have Twitter, Facebook and Foursquare to update via our smartphones and Untappd has take that next step of bringing beer (and cider) into the social media world. Once you have created an account (free) you can type in what beer you are drinking, rate it and share it with friends via Twitter and Facebook. As in Foursquare this also gives you the opportunity to win badges, for instance yesterday was International Stout Day so by drinking a bottle of the excellent Wye Valley Dorothy Goodbody's Stout I unlocked a badge:

Other badges feature beers from the same country and badges for the amount of different beers you have tried.
Untappd also lets you friend people in the similar way to Foursquare and you can comment on what beers your friends are drinking as well as 'toasting' their drink. 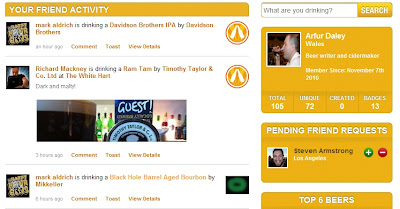 The application also makes a note of your top beers and this appears on your homepage: 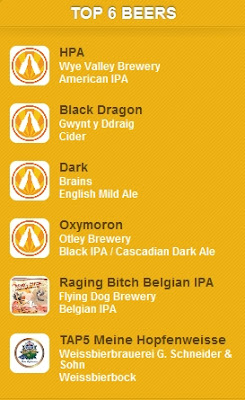 No surprises there - although the last 2 on the list were new discoveries to me, both being found in the City Arms in Cardiff during their American and German beer festivals.

Now I don't use Untappd all the time I'm out drinking, it is dependent on mobile coverage or WiFi networks (there are both mobile and desktop versions available - the mobile site is on an m. site, suitable for Symbian and they claim Blackberry, though Jonas claims he has problems using it on the Blackberry. Its also available as native apps on Android and  Apple IOS. I mostly use it via my Nokia smartphone (Symbian) via the Opera Mobile Browser (far better than any packaged browser the phone came with). Works okay and not had any major problems with it.
The native apps for the iphone and Android allow uses to upload photos as well.

All in all a good little free application for those of us who use social media.

Nice to meet you the other day.

I'm also using untappd although my mobile is not good enough to access it and update, i have to use the web version at home which is more limited i.e you cannot add new beers or add locations.
Fun though.

Nice to meet you as well.
Could not get 3g reception in Cowbridge so could not use it there.