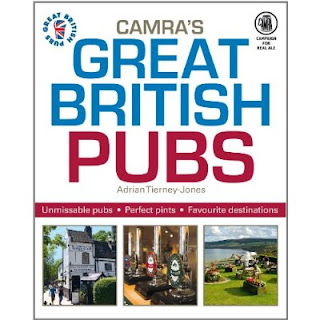 Well it looks as if ATJ has been busy recently with the launch of his latest book.
CAMRA’s Great British Pubs (published Nov 1st 2011, RRP £14.99, Paperback) is the definitive collection of the must visit pubs that can be found from the tip of Cornwall to the Scottish Islands. Compiled by internationally-acclaimed beer writer Adrian Tierney-Jones (1001 Beers You Must Try Before You Die) the book’s categorised reviews detail over 200 public houses of all shapes and sizes that represent the best of this British institution.

Recent research shows 76% of adults in the UK think that the pub makes an important contribution to British life and when asked about why he wanted to write a book on the subject Tierney-Jones explained:

‘The British Pub is a unique institution and despite many efforts to replicate it throughout the world its heart is in these islands — and the other unique aspect of the pub is that it’s also the only place where you can drink cask beer; you cannot do it at home unless of course you live in a pub. I’m a writer, I like pubs and beer. It’s a no-brainer.

‘All these pubs have something to offer beyond the promise of good beer, great food and plenty of cheer. They also offer a chance to step into another world for a while.

‘I visited the majority of the pubs, while the others were recommended to me by friends, colleagues and CAMRA members. Some will agree, some will disagree, but that’s the beauty of the British pub, it stirs the emotions, and makes people care.’

Every kind of pub is represented in the 23 categories that make up CAMRA’s Great British Pubs, with listings and full-colour photography illustrating a host of excellent pubs from the seaside to the city and from the historic to the ultra-modern.

For the category, ‘The best....beer ranges’, Adrian Tierney-Jones recommends the following pubs as outlets which offer the beer connoisseur a reason to step into their confines and study the beers within-
Bhurtpore Inn, Aston, Cheshire- ‘This is an Aladdin’s cave of drink for cask beer lovers, but what makes it slightly different is that all the ales are guests’
Cambridge Blue, Cambridge- ‘If you have a thirst for beer then this is the right place to come – up to 16 cask beers are often available’
Cask Pub and Kitchen, Pimlico, London- ‘The wall behind the bar is lined with glass-fronted coolers, where hundreds of bottled beers rest waiting to be picked out. Ask for a beer menu and you’ll probably find something you’ve never had before’
Cloisters Bar, Edinburgh- ‘There are usually up to nine cask beers on offer, from both the growing number of Scottish craft breweries and further afield’
Grove, Huddersfield- ‘So many beers, so little time. There can be up to 18 cask beers available at the Grove and if that’s not enough there’s also a trio of draught ciders and nearly 300 bottled beers from around the world’
Halfway House, Pitney, Somerset-‘Above the small bar, a chalkboard offers between eight and 12 West Country cask beers, all of them drawn straight from the barrel in a cool room at the back’
The Pub, Leicester-‘The Pub might have the most minimal name in British pub culture, but there’s nothing sketchy or meagre in what it offers the good people of Leicester’
The Rake, Borough, London-‘Cask beers from all over the country can be found on any given day: Dark Star, Otley, Hardknott and Rudgate for instance. There are also special festivals showcasing beers from various regions of the British Isles’
Southampton Arms, Kentish Town, London- ‘There is no regular beer so expect all manner of treats’
Tom Cobley, Spreyton, Devon- ‘I can testify that every time I pitch up here and taste several of the beers, they’re all in tip-top condition’
White Horse, Parsons Green, London- ‘Cask beer? Six to eight are usually on offer, with regulars Harveys and Adnams joined by beers from across the nation. There are also beer festivals throughout the year with the most famous being the Old Ales one at the end of November’

To further inform the reader, articles on brewing, cider making, classic pub food recipes and traditional pub games are included to emphasise the diversity of the Great British pub, and its many quirks. The publication also acts as a travel guide for all beer and pub lovers, with pubs presented as a stopover from which you can explore the beauty of both urban and rural landscapes, from Scotland to the Lake District to London.

It's hard to avoid the impression that this is just a collection of "the usual suspects" nicely dressed up for a Christmas book.

Perhaps a celebration of the unheralded gems of the British pub scene might be a more worthwhile venture.

Have to admit I have not read the book myself so just used CAMRA press release plus the link to Amazon where it can be bought cheaper than via CAMRA.