New Conway, 58 Conway Road, Pontcanna, CF11 9NW
Open 12-11 Monday-Thursday, 12-12 Fridays & Saturdays, 12-10.30 Sunday
www.theconway.co.uk
The New Conway is a two-story Victorian building, with a traditional slate roof. Originally built as the Conway Hotel this street-corner pub was once owned by Whitbread Brewery and later Enterprise Inns who lease it to Knife & Fork Food Limited. Woods Brasserie in the Bay and the historic Old Swan in Llantwit Major are also run by this company. The name changed to 'The New Conway' a few years ago after a refurbishment. The exterior of the pub is rather plain, though with original corbelling above the ground floor windows. There is also an outside seating area on the part of the pub set back from the road.
The interior is relatively unspoilt with the original Victorian wooden bar running parallel to the outside walls. The walls are partly timbered and the pastel colours continue inside with light green and white being the theme throughout. A varnished wooden bar counter and brass foot-rail provide some contrast, as do the four gleaming brass handpumps serving real ales from Welsh breweries such as Vale of Glamorgan, Kite, Otley, Newmans, Purple Moose as well as those from further afield such as Timothy Taylor and Wychwood. Good to see the smaller independent Welsh breweries being supported in a back street pub. The bar back or gantry as it is known in Scotland has some unusual arching in it and may be another original feature of this pub.
The bar section is quite narrow and leads to the dining section at the rear of the pub. 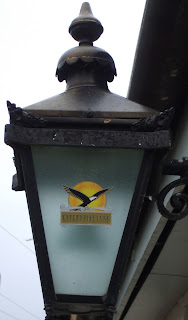 The New Conway is unmistakably a gastropub, but one with a firm commitment to real ale. There is also an extensive wine list as well as a good selection of single malts. Around 30 single malts are available, many from distilleries not normally seen in Cardiff, including one made with chocolate malt which is normally used to brew dark beers. Although at £18 a shot it is a bit expensive.
There are no printed menus on the tables, instead chalkboards which are updated daily feature the specialities of the house on that particular day. With everything from tapas, baguettes, full meals and deserts, the New Conway offers a wide menu with something for everyone's palette.
Throughout the year, regular themed nights are held, often featuring the pairing of drink and food, the most recent one was a Welsh night and a wine tasting is coming up in November. The New Conway also offers free WiFi and does not smell of fish as other nearby pubs do.
Google Map:
View Larger Map