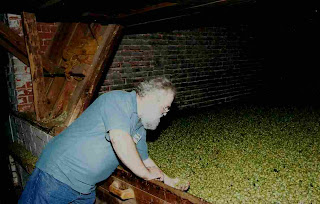 Photo above: Iain Turnbull inspecting hops at a Herefordshire Farm a few years ago


Iain Turnbull, who has brewed at Welsh breweries such as Brains and Reckless Eric's, has decided, in his own words, “To leave a lasting legacy to beer drinkers all over the country”, by commissioning a special beer entitled Brewer's Swansong to celebrate his life in the brewing industry. Iain was sadly diagnosed with cancer recently and proceeds from the sale of Brewer's Swansong will go to the Macmillan Cancer Charity.
Iain is a graduate of Heriot-Watt University and in his 41 years in the brewing industry has spent time with Courage Western in Bristol, Newport and Devonport, Courage Central in Reading, S A Brain in Cardiff, Reckless Eric's in Pontypridd (well Cilfynydd), Restalrigg and Fisherrow in Edinburgh, a lager brewery in Nigeria and the Fowlers Ales Brewery in the Gothenberg, Prestonpans. Iain has even tried to recreate an authentic Welsh Ale, known as Bragote, which was available to taste at a beer festival in the White Hart, Machen, a few years back. This ale was brewed without hops and used spices and a wild yeast to produce a beer which was described as 'interesting to say the least”. The spices flavoured the beer a bit too much, but after the brew had aged for around 18 months, the spices became more subtle and quite a pleasant flavour was produced. There are records of Bragote being aged for many years and in Medieval times it was in high demand and often exported to England.
Iain, who has created over 200 different beers in his lifetime, wishes to celebrate his career in brewing with Brewer's Swansong, a dark, malty and hoppy beer, with a toffee apple flavour from the high quantity of Crystal Malt used. With an original gravity of 1118 and a predicted final gravity of 11.5%, this will certainly be a beer to remember him by! As well as being available in pubs, a proportion of the brew will be matured in a whisky cask, to be drunk at his funeral wake, “Toast me as I toast”, as Iain has said.
Iain now lives in Stornaway on the island of Lewis in the Hebrides said, “ I am terminally ill and there will come a point in the future when I will need the help of Macmillan nurses so I thought it would be an innovative and enjoyable way of raising money for them as a thank-you in advance for the future care I am likely to need and to do this whilst I am still fit enough. That is where I perceived the idea of brewer's Swansong. It's strong – about 11.5% and the proportion put into a whiskey cask will be bottled to be laid down to be drunk when they throw me into a fire. All attendees at my demise will get a bottle. It will be a beer to remember as it is the last beer I will brew”.
Brewer's Swansong will be brewed at the Tryst Brewery in Larbert, Near Falkirk, and available via Waverley TBS and Flying Firkin. Iain has requested that the orders go through him and he can be contacted on 07826 566687. First batch is available now, at 6.9% ABV, so if you wish to help support Macmillan Cancer Support and celebrate Iain's 41 years in brewing ask your pub to get in touch with him.