Daley Dozen, part 2. An occasional series devoted to a dozen best things in the beer world.
12 favourite pubs in London:

1. Dove, Hammersmith. Riverside pub, just down the Thames from Fullers Brewery. It seems that nothing has changed here for years and yet this pub is still surprisingly unknown. Brew Wales escorted a couple of American tourists to the pub after a trip around Fullers Brewery last year and they were amazed to find such a place that was not in any guide books. It is in the 1934 edition of “The Old Inns of England! The long pub has separate drinking areas, including the smallest public bar in the world, verified by the Guinness Book of Records. Oh and 'Rule Britannia' was composed upstairs! 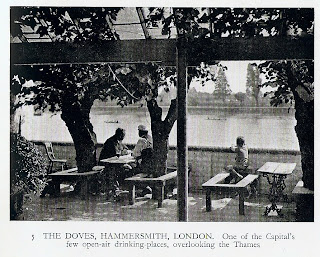 Photo above from 1934 book "Old Inns of England"
2.Cittie of York, Holborn. The interior of this Sam Smith's pub is fantastic with an oak-beamed roof, old spirit casks and a triangular fireplace. Forget the front bar, always head to the rear of this pub, for a truly unique drinking experience. One of the Capitol's more unusual pubs, it was rebuilt in 1924 on the site of an older building and there is also a cellar bar dating from an earlier building
3. Old Cheshire Cheese, Fleet Street. Another favoured haunt owned by Sam Smith's brewery, this pub was rebuilt after the Great Fire and some of the wood panelling in the pub is believed to be original. An odd collection of different rooms on different levels, this surely must be one of London's greatest pubs?
4. Sanctuary House, Westminster. A short walk from the Palace of Westminster, the Sanctuary House was the closest Fullers pub to Parliament until their recent purchase of the Red Lion. Handy for a bite to eat at a reasonable price and a good place to read the Evening Standard, the Sanctuary House is also an hotel.
5. Mad Bishop & Bear, Paddington. The old station bar at Paddington was never much good and Brew Wales only ever used it whilst awaiting the (often last) train to South Wales. However, when the station and the Great Western Hotel were redeveloped, Fullers Brewery put a pub on the first floor of the food court. Handy for breakfast from the early trains or the last pint whilst awaiting the last train, the Mad Bishop & Bear stocks the full range of Fullers beers as well as guests from other breweries. Also useful to stock up on a few bottles of Fullers ales for the train journey back to Wales, but not too many 1845 as might miss the stop!
6. Ye Olde Mitre Tavern, Holborn. Difficult to find, no make that really difficult to find, the Mitre is surrounded by buildings on all sides and is accessed via a narrow passageway. Very popular pub lunchtimes but the rush does ease off after 2. The Mitre is wood-panelled throughout and offers excellent real ales as well as toasted sandwiches in an atmosphere unparalleled anywhere in the Capitol. Recently bought by Fullers, we do not expect any big changes here!
7. Red Lion, Westminster, back in since Fullers have bought it! The Red Lion was always one of Brew Wales' favoured haunts back in the days of living in the smoke. Great enjoyment is still to be had when the Parliamentary Division bell rings in the pub and the tourists run out thinking its the fire alarm! Now Fullers closest pub to Parliament, Brew Wales will no doubt be using it a lot more.
8. Princess Louise, Holborn. 20 years ago this pub was owned by Vaux Brewery of Sunderland and was a large building with an open-plan island bar. Then a few years ago Sam Smith's Brewery bought it and did what can only be described as a “derefurbishment” in which new partitions were put into the slots left when the pub was converted to open-plan in the 1960s. What resulted was an authentic restoration of a Victorian pub, so good that it looks like it has always been like this.
9. Founders Arms, Bankside. One of the few proper outside drinking areas in London, the Founders is a Wells and Youngs pub on the south side of the Thames. A moden pub, it was built to take full advantage of the the setting and the views of the river and of London are great here on a sunny afternoon and yes you can see St Pauls Cathedral from the pub.
10. White Horse, Parsons Green. Now the 'Sloaney Pony' offers an unprecedented range of beers, both foreign and from the UK. A very popular pub, the Green outside often becomes an extended drinking area in the summer. A few beer festivals are held throughout the year, including a 'Winter ales festival' at which the author of this blog was photographed in the Hammersmith Gazette some 18 years ago!
11. Victoria, Paddington. Unusual 'Gin Palace' survivor that has its own theatre bar. A short walk from Paddington station, this small, street-corner pub is well-worth visiting. Used to be the Brew Wales regular stop off before the refurbishment of Paddington Station.
12. St Stevens' Tavern, Westminster. Closest pub to Parliament, the St Stevens' Tavern is next door to Westminster Tube station and across the road from Big Ben. It was closed for 20 years, hence Brew Wales never went there whilst living in London and it came as a nice surprise when someone told us about the pub. Owned by Hall & Woodhouse (Badger) the St James' is a nice mixture of Victoriania and modern pub design. As long as there are no protesters in Parliament Square.

A lot of Fullers pubs in that list, but then again, Brew Wales is partial to a pint or two of their beers. Just a personal choice, I know there are pubs with better beers in London, but for some reason or another, these are the pubs that Brew Wales has frequented regularly over the last 20 years and still returns to them.

how about the Gun in the docklands..

a bit posh but good beer and real fires and food

Will try and get there next time am in the smoke!