Pink Panther takes off with Beer of the Festival!

CAMRA bar at Tredegar House Folk Festival 2009
The CAMRA bar at the Tredegar House Folk Festival was another success this year with the real ales selling out on Sunday afternoon. Luckily some bottled real ales were found with Ffos Y Ffin Brewery quickly selling out before a truckload of Penlon Cottage Brewery beers arrived via Gwynt Y Ddraig Cider, who act as wholesalers for their beers locally. Well done to Bill and all at Gwynt Y Ddraig for helping us out at the Festival.
The only downside to the Festival occurred during the opening ceremony, when the guest of honour, disgraced self-confessed libelist, Paul Flynn MP, failed to turn up on time to open the festival. To the shouts of “Is he doing his expenses?”, his non-appearance at the opening drew the kind of derision and ridicule that is normally only reserved for a British Prime Minister addressing the European Parliament.
The septuagenarian stroke-ridden Castro supporter eventually turned up at a later time, looking somewhat confused that he had missed the opening of the Festival. Ahh, bless him, Newport definitely deserves better.

Beers of the Festival
This year we had a public vote for the best beers of the festival. Unlike some other festivals where the owners of the breweries have to take time off suffering from writer's cramp due to vote rigging and ballot box stuffing, the votes at this festival were conducted by drinkers and staff at the festival. 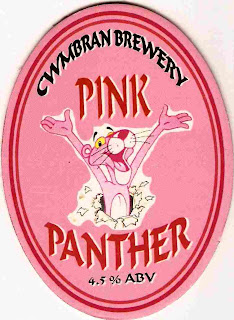 1st Place. Cwmbran Brewery Pink Panther. Not a personal favourite of Brew Wales, but always popular with the customers, this is made with natural spring water from Mynydd Maen and raspberries!