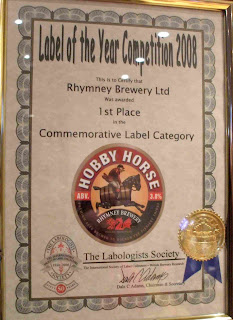 Merthyr Tydfil- based Rhymney Brewery have won an award for the "Commemorative Label of the Year", issued by the Labologists Society, for their Hobby Horse logo. Okay the competition was in 2008 but this has only just come to the attention of Brew Wales after spotting the award certificate in the Winchester in Merthyr. The certificate takes pride of place between a couple of certificates from CAMRA, the Campaign for Real Ale, awarded to Rhymney Brewery for winning beer of the festival at a couple of local beer festivals.

The Hobby Horse was the old trademark of the old Rhymney Brewery, closed by Whitebread in the 1970s and was bought by Steve Evans of the new Rhymney Brewery a few years back. Originally the logo came from Pritchard's Brewery of Crumlin and the area where the Rhymney beers were sold was known as "the land where the Hobby Horse roams".

With the new Rhymney Brewery going from strength to strength and about to about to open a second pub, the Patriot in Taff Street, Pontypridd, it looks like the Hobby Horse is once again set to roam the hills and valleys of South Wales.

I was not aware about the pub in Ponty, its needs something apart from a bomb....

hobby horse is always a first choice when it's on....

Tell us more about the Pritchards, maybe? We may be descendants. Thanks