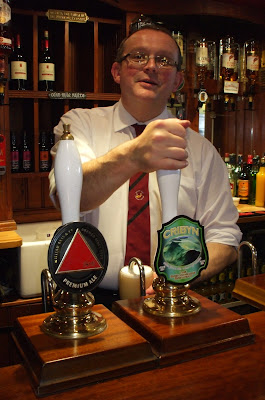 Legendary Newport publican Richard Jackson has returned to being the behind the bar for the first time in 12 years, having taken on the free-of-tie lease of the Pen & Wig, Stow Hill. Richard previously ran the Red Lion further up on Stow Hill where he won many awards, including Gwent CAMRA Pub of the Year. He first took over the lease of that pub under Marr Taverns and quickly established a name for the pub with the quality of the real ale. The Red Lion was later bought by Ushers Brewery of Trowbridge, Ushers would not have other brewers beers in their pubs but the ever enterprising Richard realised his customers preferred more interesting, hand-crafted beers than those high-gravity and rather bland beers produced by that brewery which has since been moved to North Korea to produce beers that go well with spaniels.
The answer was the so-called 'Ann Frank Cellar' – basically you went down the stairs to the cellar and instead of turning left into the beer or lager parts of the cellar, you turned right into what looked like a storeroom for old pub furniture and moved some of it out of the way, slid back a board to reveal a secret door, undid the padlock on the door and stepped into a small room, slightly bigger than a wardrobe and stillaged with a beery Narnia world from independent brewers beers from the likes of Bullmastiff and Freeminer. A line led from this cellar to the main beer python and up onto the main bar and the handpumps on there. Naturally no pumpclips could be used on the bar, so customers were told by the bar staff what the 'Special' was for the day. Of course this pub went onto win awards from CAMRA, much to the bemusement of Ushers brewery who could not understand why one of their pubs had won so many awardswhilst the rest of their estate was pretty piss poor to say the least, with the other exception being the Old Swan in Abercarn.
Before the Red Lion, Richard did a brief stint managing the Pen & Wig and before that ran the Tavistock in Cardiff a Brains pub at which he won the 'Manager of the Year Award'.
Richard Jackson first came to the attention of real ale drinkers in Newport by running the famous Orange Tree in Pill, a once legendary boozer, now sadly demolished and housing built in its place. In the Orange Tree, Richard sourced beers from across the UK and customers would travel miles to drink a decent and different pint there. 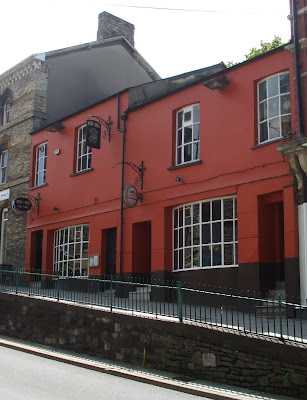 Above:The Pen & Wig
But let us return to the Pen & Wig, Richard has already brought in the changes since taking over a little over a week ago. Already the pub is noticeably cleaner with the beer flies that have plagued the pub for years being eradicated together with the smokers of exotic tobaccos who used to hang around the back door, stinking the place out with skunk. Since taking over only 10 days ago, already 14 people have been banned from the pub! No doubt they have crawled back to Chaverspoons who will no doubt be happy to serve them!
The Beer Range
Well the Pen & Wig has 5 handpumps but Richard is being sensible and is slowly building up the trade rather than put 5 different ones on all at once. Flowers IPA, brewed under license by SA Brian is sold at the very competitive price of £2.05/pint and alongside that is Bass, Newport used to have a good following for Bass with legendary beer holes such as Conti's, the Lord Raglan and the Tudor Bar of the Queen's Hotel all famed Bass drinking holes and all now converted into retail premises. Yes I include the Queens, now a Chaverspoons as a 'retail premises'. The guest beer at the moment is Cribyn from Breconshire Brewery and will be followed by beers from the current Champion Brewers of Wales Rhymney Brewery and past winners Otley Brewery. Expect all 5 handpumps to be in use shortly and Mein Host wants to put in a draught cider as well.
The Polish Lager Tyskie is available in bottles alongside Tsingtao and Staropramen. “A celebration of the cultural diversity of of the City of Newport”, according to Richard Jackson. The cultural diversity even applies to the music, with an umpah band booked for the 23rd July.
Pub Food
Traditional pub grub such as faggots n' peas and doorstep sandwiches are served lunchtimes, whilst at night, in a first for Newport, a traditional Thai menu is served with specialities such as Choo Chee Goong (King Prawns in red curry paste and coconut milk) and Kai Gaeng Kus Suppoarad (Chicken Curry with Pineapple). And yes, before you ask, Otley Thai-Bo is on order as a guest beer. 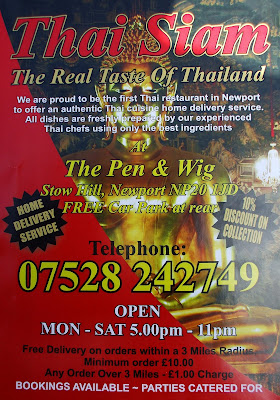 Pub History
The Pen & Wig only became a pub in 1995, before that it was a restaurant called The Georgian. The building has had a number of previous uses including as the registry office and a wedding gown shop, a useful combination. There has been a building on this site since at least 1610 as one is clearly marked on the John Speed map of 1610. Situated just outside of the medieval Westgate, there has probably been a building on this site for over 600 years, whether or not it was pub or not is another story!
The pub still has a Shove Ha'penny table and a team as well!
Pen & Wig
22-24 Stow Hill
Newport
NP20 1JD
Open all day
Google Map: