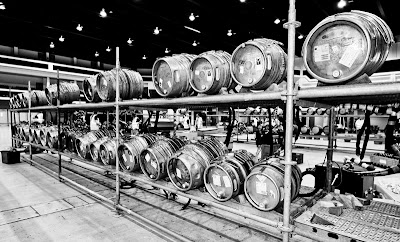 Photo: www.jonas-photography.co.uk
Today is the second day of setup at the Great Welsh Beer & Cider Festival, apologies for the lack of blogging but I've been a bit busy at the Festival, hence the lack of blogging, but you can follow my updates on Twitter, @ArfurD as well as on Facebook. We also have a Flickr account so you can see the photos of the festival.
Was a nice surprise to see Glynn Roberts of the Rake today at Cardiff Railway Station as he headed up north to brew at Otley Brewery today.

Question: i was surprised by the obvious lack of promotion in Whats Brewing of the GWBCF, full page ad's for the British one and numerous other mentions, but very little for your one. Any thoughts?

WB charges us a full rate for a adverts. Despite being a national CAMRA festival we have to pay for all adverts, even in the CAMRA newspaper. That money can best be spent elsewhere locally on posters, flyers etc.

Seems daft effectively charging themselves to promote their own festival. I presume thus the Great british festival committee is charged also. But surely profits from the festival eventually go into the CAMRA coffers, or is that not how it works?
(sorry to ask all these questions when your obviously busy!)