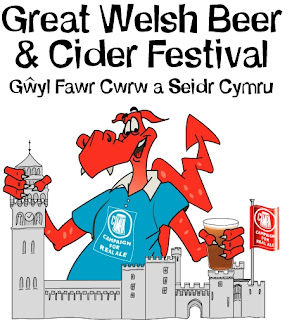 Well thank you everyone who attended the Great Welsh Beer & Cider Festival this year and made it the outstanding success that it was. This gives us a firm base to build on for next year and make the Festival bigger and better with more real ales and ciders in 2012.
Apologies for those who turned up on the Saturday night, despite emergency reorders of beer coming in that morning, we still sold out and finally closed at 2030hrs, although we shut to admissions a few hours earlier. This is the first time the Festival has ever run out of beer and last year a lot of beer was poured away on the Sunday morning so it is a difficult balence to get right. All the organisers can say is that next year we will make the Festival better with a bigger range on.
This year over 6000 thirsty customers drank their way through over 20,000 pints of real ale and over 5000 pints of cider and perry.
Highlights of the Festival for me were beer wise:
I did not get a chance to try the Champion Beer of Wales, Rhymney Dark at the Festival, but I did review it a few weeks previously in my South Wales Echo column.
The problem with being the organiser of the event was that I did not have chance to try as many beers as I would have if I had been a customer! As for the ciders and perries - well I tried a few when I was judging but hardly had the chance to try them all - although a gallon of perry from Llanblethian Orchards did find its way into my office during setup and was shared amongst staff and press if they happened to be in there!

Press Roundup:
Media Wales and their photo gallery from Your Cardiff:

BBC Wales
We were also on BBC Radio Wales on Thursday

ITV Wales - our man in the white jacket fell victim to the colour balance at the Arena!
We also made it onto the ITV Wales blog

Simon filmed this before tasting some beers with Nick Otley:

During the Festival regular updates were posted on Twitter and Facebook, with the hashtag #gwbcf proving very popular. We also have the Flickr page - well done to Jonas for taking all the photos this year!

A big thank you to our 150 staff who turned up during the Festival and also to our customers and finally to all our supporters, including the breweries and cidermakers who helped make this the biggest and best festival yet!

Thanks to you and your colleagues/helpers for a great festival!