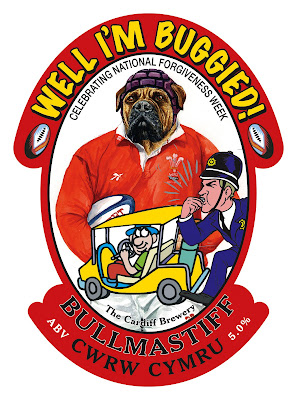 Celebrate National Forgiveness week with Bullmastiff Brewery
An award-winning Cardiff brewery is launching a new beer this week with a theme of forgiveness. Bullmastiff Brewery is celebrating National Forgiveness Week with a 5% real ale, hand crafted by brewing brothers Bob and Paul Jenkins at their small craft-ale brewery situated off Penarth Road in Cardiff. The new beer, called Well I'm Buggied was named after an incident that occurred a few weeks ago involving a member of the Welsh Rugby Union team and a golf buggy. However, according to Bullmastiff brewer Bob Jenkins, “Now is the time to forgive and what better way to do it than with a pint of Bullmastiff beer. Throughout the year there are celebrations for various events so why not a National Forgiveness Week to forgive those who may have stepped out of line in the past?”
Bullmastiff Brewery Well I'm Buggied! 5% ABV, will be available on draught in pubs across South Wales such as Fagins in Taffs Well and the Lorelei Hotel in Porthcawl.
Bob Jenkins continued, “We brew our regular ales such as Son of a Bitch and Bullmastiff Gold throughout the year but every now and again we decide to create a new beer recipe which we find is popular with CAMRA members who appreciate a different locally brewed hand-crafted real ale. This is what we have done with Well I'm Buggied and I'm sure it will be hit with our customers”.
Bullmastiff Brewery was established in 1987 in Penarth by brewing brothers Bob and Paul Jenkins and moved to Cardiff in 1992, their beers have won awards in CAMRA local and national competitions. The brewery does not run any pubs and all their beers are served on handpump in pubs throughout South Wales, including the unofficial brewery tap, the Wetherspoons-owned Boars Head in Penarth. The Bullmastiff Brewery was named after Bob's prize-winning dogs and the beer names often feature a humorous play on words involving dogs.
Tasting Notes: Well I'm Buggied is a tawny-coloured strong ale with a fruity aroma, caused by the use of Saaz hops added later to the boil. Fuggles and Goldings hops also provide the bitterness to this beer and the taste is of a biscuity flavour caused by the use of Maris Otter Pale Malt. Both Crystal and Chocolate Malt are also used in this beer, the latter for colour more than for flavour. The hoppy aftertaste gives a satisfying bitter finish to this beer.
Further Information:
Bob Jenkins, Bullmastiff Brewery, 029 20 665292 or 0790 190 1810