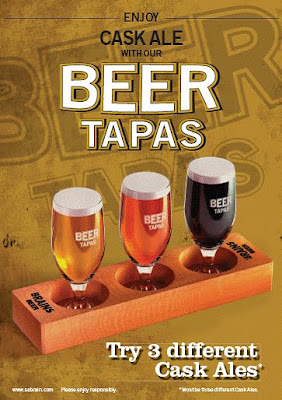 Welsh brewer Brains is going continental. The company, famed for cask ale favourites such as Brains SA and Dark, will be launching ‘Beer Tapas’ ahead of National Cask Ale Week (29th March – 5th April) in a bid to encouragecustomers to try their beers that they might not always go for.

Featuring three third pint glasses in a branded wooden tray, Beer Tapas will be available throughout and beyond National Cask Ale Week in around 200 pubs, including over 100 Brains managed and tenanted houses.
Richard Davies, Sales and Marketing Director explains: “The beer tapas tray gives customers the opportunity to try three different cask ales but drink the equivalent of one pint. We think it’s a great way of encouraging customers to switch from other categories to try cask ale and also a good way of giving current cask drinkers greater variety of choice.”
The tray has been branded ‘Brains Beer’, and the glasses are etched with ‘Beer Tapas’. Richard Davies adds, “This is about growing the cask ale category, with an emphasis on trial and exploration. Naturally we want to encourage customers to try the full Brains range, but we also want to see them trying brands and styles they wouldn’t normally try.”

A list of participating Brains pubs is available on their website here
Brew wales will no doubt be trying Beer Tapas out at one of his favourite Cardiff haunts such as the Goat Major or the Cottage next week.

Nice...want that tray and glasses - wonder if they will be selling them...