In the last few gasps of this fag-end Government, the hopeless Chancellor of the Exchequer and badger lookalike Alaistair Darling presented what will hopefully be the last Labour Budget for a very long time. Not content with the 4000 pub closures we have seen in the last two years, the champagne-socialist Darling further increased the duty on alcohol, with a 10% + inflation duty incrase on cider. Yes, that's correct, on that most traditional of British drinks that is still produced in traditional manners will now see the price increase from Sunday. Not content with being banned from the majority of pubs in the UK in previous years, darling now seems content to being banned from all cider farms in the UK as well.


Needless to say, cidermakers are not too happy about this and a few expletives were mentioned when Brew Wales spoke to some of them earlier today. Denis Gwatkin of Gwatkin Cider said, "This tax rise will hit us all, from the pickers, the growers, the medium-sized producers such as myself right up to the big producers such as Bulmers and Westons. having already ruined the pub trade, the Government now wants to ruin the producers". Denis also went on to call the Chancellor a "Fing bastard" a statement many of us are agreeing with today.

LABOUR TO BE EXTERMINATED AT ELECTION Denis and friend extend a warm welcome to Alaistair Darling should he happen to visit Abbey Dore in the future
Meanwhile in Wales, Bill George of Gwynt Y Ddraig Cider, Wales' largest producer of craft ciders and perry said, "This tax on cider is a very short-sighted view, we contribute over £100,000 a year to the economy in duty and now the champagne-socialist Darling wants customers to pay a higher price for our products just so that Members of Parliament can have another plasma TV screen on expenses. This budget is doing nothing for the economy or for businesses in this recession".
Other comments from cidermakers today described Alaistar Darling as "a dirty whore", "scumbag" etc.
So well done Darling, that's the rural vote well and truly in the bag. Now piss off back to Jockland and never screw up our country again. 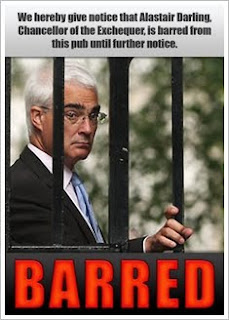 Not a lot of Labour seats in the West Country, or the countryside in general, are there?

Gwynt Y Ddriag are based just outside of Pontypridd, Labour seat of Kim Howells MP