From Fido at the Lone Voice, reprinted in full it is that good 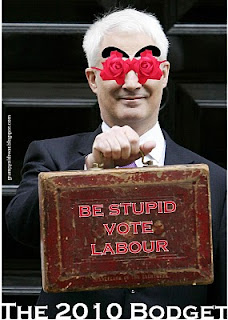 New Labour hates drinkers. A Facebook group opposing the Chancellor's 13% increase in cider duty has been launched within minutes of the Budget announcement. In fact two have been launched:
Leave Our Cider Alone
and
Cider Drinkers and Makers Say No!


The group, called, Leave Our Cider Alone! states, "Alistair Darling has proposed a tax duty increase of 10% "above inflation" on some cider from Sunday. Why? Is he not a cider lover? What have us cider drinkers done to Alistair Darling? Join the group and invite cider lovers."

The description ends with a plea: "We can't let this happen".

Cidermakers Brothers Cider tweeted that duty on its Pear, Festival and Bittersweet Apple brands would go up by 13.13%. However, its Toffee Apple, Lemon and Strawberry flavoured drinks fit into the wine category, and escaped with a lower increase of only 5.13%.

Visit the site by clicking here.

"Today’s budget is a charter for the large supermarkets who irresponsibly promote alcohol as a loss leader at the expense of our nation’s community pubs, real ale and responsible pub goers.

"CAMRA is totally at a loss in understanding how a Government that recognises the community value of pubs can impose such consistently draconian beer duty increases.

"Today’s duty increase has stamped down on the survival hopes of community pubs across the UK.

"This is a further tax raid on responsible beer drinkers and community pubs. It is however a tax raid that will yield little extra money for the Government as any extra beer duty will be outweighed by job losses, pub closures and reduced business taxes."

"This latest beer tax hike piles on the misery for Britain's hard-pressed pubs and beer lovers. It is also a snub to voters, who by a majority of two to one wanted the Chancellor to scrap the beer tax escalator.

"The Chancellor’s claims that this is a Budget for investment and growth are hollow, considering he’s just hit the beer and pub sector with a £161 million tax rise.

"The extension of the tax escalator for an extra two years also means more pain. Recently, there had been some signs of improvement in our industry but this recovery will be threatened by Mr Darling's tax rise, which is putting hundreds more pubs and thousands more jobs at risk."

“Once again, by continuing with the duty escalator, the Chancellor has defied logic to heap a further tax burden on one of this country’s most valuable industries.

"This ill-advised policy will benefit no-one, as the consumer will pay more and the Treasury will receive less revenue from tax as a result.

"Pubs are closing at an alarming rate, beer sales are down an astonishing £650m and 24,000 jobs were lost in the sector over the last year. The last thing we need at this crucial time is more tax, which places beer and pubs at an even greater competitive disadvantage.

"British beer and the British pub are icons of this island and they are in desperate need of support from our politicians, whatever their political leaning. My hope now is that whoever holds the red box at the next budget will actually listen to the industry and the public at large and put an end to this destructive policy."

"Today’s announcement is another example of the apparent disconnect between what this Government says about encouraging local, sustainable economies and what it does, which is having a disastrous effect on the pubs that local brewers need to thrive if they are to thrive themselves.

"The sooner it realises the link between the two and starts making policies that support local pubs and local brewers, rather than damaging them, the better.”

“The continuous percentage hikes in duties across the board fail to address the imperative to move consumers away from stronger alcohols with greater potential to cause harm, towards cask ale.

"Cask beer, with its relatively low ABV, is always consumed in the controlled, socially responsible environment of the pub, making it a much less damaging form of alcohol than cheap supermarket-bought spirits. “

"Whilst I welcome the moves made by Pub Minister John Healy last week to ensure a fair deal for pub tenants, the announcement in today’s budget will visit great harm on the industry.

“Rise after rise in duty completely undermines the attempts by the Government to prove that they are taking the plight of the pub industry in Britain seriously."

“This is not a route map out of recession for pubs and bars. Each one of these employs about 10 people and together they contribute £9 billion a year in taxes. The Pubs Minister has drawn attention to the rate of pub closures and is proposing ways to stem the decline; but his colleague at the Treasury seems to go out of his way to reduce operators’ income and profitability.

“The Chancellor, having reinstated the new higher VAT rate in January has further racked up prices by increasing duty rates on beer, wines and spirits by 5% from Sunday. This will translate into 10p increases per pint at the pumps with equivalent premiums for wines and spirits and this will drive price-conscious customers away from pubs and accelerate the downward spiral of sales in a beleaguered sector.

“The opportunity for pubs to be recognised as the best and safest places for responsible consumption has again been missed. Supermarkets will force suppliers to absorb the duty increases and thus increase the differential between the on and off trade. Minimum pricing is controversial and maybe illegal, but a ban on below-cost selling is in the gift of the government now.”

SIBA, the spiteful bunch of Little-Englanders who lobbied the Government for an increase in cider duty... Congratulations on helping push the cider industry back to the bad old days of the 70's, ie. no investment, no orchard planting, no future, and for what gain little brewers?... none I can see.

BBC Radio 5 Live reports tonight that the cider duty increase was a Tory policy stolen by Labour, so perhaps your title doesn't tell the whole story? Good link bait though ;-)

@Mark real ale reviews: the Tory plan was to tax the high strength white ciders, not the craft produced stuff. Can't help but think things would have been better if the National Association of Cidermakers had bunged a former cabinet minister £5k to have a word with the chancellor....

Fair dos, 'high class' journalism shows it's flaws again! you'll know better than me then , is Darling's comment 'through an anomaly cider has been previously under taxed' true at all?

Cider has always been taxed differently to beer, just as spirits and wine are taxed differently. Depends on which way you look at it as to cider being under taxed, cidermakers say that as a rural, farm-based industry they need the balance in their favour to compete in the drinks market.

Cider has previously been taxed with a lighter hand than beer because of the completely different economics to brewing.

For decades cidermakers have seen the value of their products fall, driven largely by the infamous price wars between the industrial producers during the 80's and the continuing widespread perception of cider as a cheap farm commodity (sadly still perpetuated by some in the industry, plus some CAMRA members!).

Thanks to lobbying by the industry via the National Association of Cidermakers, government were persuaded of the need for massive investment in a struggling (largely rural) industry, particularly with regard to UK orcharding which has been in decline for decades. Thanks to the lower taxation, the cider industry have been involved in the first widespread orchard plantings, probably since the war, on the back of improved confidence that cidermaking had a profitable future.

Orcharding is a very long-term investment, expensive of land and raw material initially, and without any realistic return for at least 5 years with and expectation of breaking even on the investment after maybe 10 years. Without a guarentee of a reasonable return on tis investment, orchard planting will probably now cease, and the cider industry could possibly stagnate.

SIBA's position on this has been risible. Nepotism at it's worst, and I say tis as someone who has supported SIBA members for years, and has broadly supported their goals through CAMRA memebership. Do these people really think a few more pence on the price of a bottle of Mageners will lead hoards of people to choose their beers instead? The only result of this tax hike will be a reduction in the quality of mass-produced ciders, and medium sized regional cidermakers reigning in their growth plans. Who wins? Nobody...

Wow, great response guys and girls (thank you!) it's a good job I'm a geek and have read all of it. I'll probably have to come back to it too!