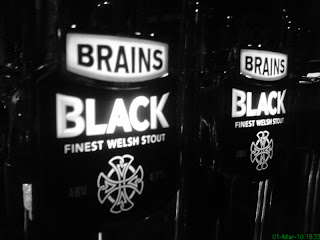 A new beer for March. Launched on St Davids Day, Wales' largest brewer of cask ale, SA Brain have decided to go for the Guinness market with their stout. Yes it is nitro-keg but that aside it is a flavour-packed beer and with less carbonation than Zero Degrees on Westgate Street. Brains have produced a full-flavoured stout with a wonderful dry astringency to it. Although brewer Bill Dobson would not tell me all the ingredients, chocolate malt did go into this brew. I fully admit to liking this beer, lets face it, the Irish stout has dumbed down its flavour so much over the years it is more of a drinking experience than a taste experience. Tasty keg beers,whatever next, tasty real ales from west of Swansea?