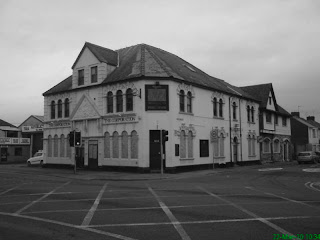 That's the end of the Corporation, more lately known as just the Corpa, as Newport City Council has granted planning permission for it to be changed into flats. The pub closed late last year and suffered a "suspicious fire" just after new owners had bought the pub from some Pubco. Situated on the corner of Corporation Road and Cromwell Road, the Corpa had a good catchment area but years of neglet by both the brewery who owned this building and the later pub co took its toll. The Corporation was built in 1898 by Hancocks Brewery and featured all the modcons of a late nineteenth century pub, including a skittle alley that was in use until quite recently. The Corpa is currently derelict and joins the nearby King and Black Horse pubs in the sad state of Newport pubs that have closed under this Government.

Big Vern has let it be known that the fire was in no way suspicious, that no accelerants were used or large amounts of cash deposited into his account.

That it was a sad and tragic accident and nothing else, oh and the cheque is in the post by the way.

This is sad news.

In the early 80’s the Corporation was effectively my local in that it was the only pub anywhere near to where I lived that I used at all.

It was not, to me, then at least a great pub nor had it great beer but it was a lively, friendly place and a true centre of the local community.

The old guy in the bar who played the penny whistle was worth a visit alone.

When last in the area; April 2008, while I expected to see it changed. I was amazed and very disappointed to see that it had been half transformed into a sort of bistro style bar totally out of character with the neighbourhood.

So much so I never even bothered to go inside.

What a pity but there again maybe it is better to just remember it as it was?