The Watermans Arms in Pembroke has been named ‘Leased and Tenanted Pub of the Year 2012’ by Welsh pub operator S.A Brain and Co Ltd. Licensees Adam Sammons and Liz Pullen collected the award, plus a £1,500 cheque, at a ceremony held in Cardif. 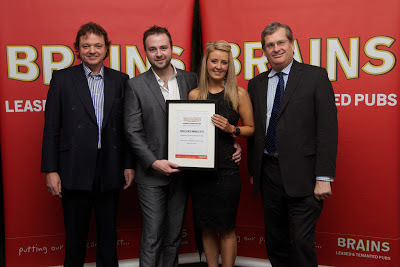 Above: Adam and Liz with Richard Davies, sales and marketing director, and John Rhys, Chairman.
Adam and Liz took on the pub in 2010 and have since set about transforming the waterside venue. As well as refurbishing the interior and exterior, the couple introduced a new daily food offer, with an emphasis on fresh fish.

Adam explains: “We’re really proud of what we’ve achieved so far. The Waterman’s is a great pub in a fantastic location and to be recognised by Brains is a huge honour."

Four other awards, plus a cheque for £1,000, were handed out on the night:

· Brains beer pub of the year: Butchers Arms in Canton, Cardiff
The Butchers has long had a reputation as a pub where you can enjoy a range of cask ales in perfect condition, and Chris has carried on this tradition. The pub is one of Brains’ craft beer stockists, serving around two craft beers a month.
· Food pub of the year: Langford Inn in Langford, North Somerset
Philip and Claire at the Langford Inn, just outside Bristol, were the winners of the Food Pub of the Year award. The Langford has built up a reputation for its home cooked food offer. The daily changing menu features locally sourced ingredients and fresh fish. Equally impressive are the seven en-suite bedrooms, housed in two converted 17th century barns, featuring exposed beams and original brickwork.
· Customer experience pub of the year: Old Station in Hallatrow, Bristol
Debra and Neville at the Old Station in Hallatrow, Somerset, picked up the Customer Experience Pub of the Year award. The couple have been running the character pub since 2008, which also features a carriage – modelled on the Royal Scotsman’s dining car – as its restaurant. They’ve created a welcoming environment, serve quality food, and deliver outstanding customer experiences.

· Most improved pub of the year and best kept cellar: Ivor Arms in Pontyclun
Ian and Margaret, who also run the Romilly in Canton, took on the Ivor Arms in 2011. Since then they have significantly grown the business, which is testament to the hard work they have put in. And as their best kept cellar award shows, they maintain high standards.

Richard Davies, Sales and Marketing Director at Brains, said: "The awards ceremony gives us a chance to celebrate the variety of pubs that we have within our estate, and recognise and reward our best tenants.

“Last year was an excellent one for Adam and Liz, who have turned the Watermans Arms into a popular and profitable pub. They, like the rest of the winners, have shown that if you’re willing to put in the hard work and effort, the rewards are there.”