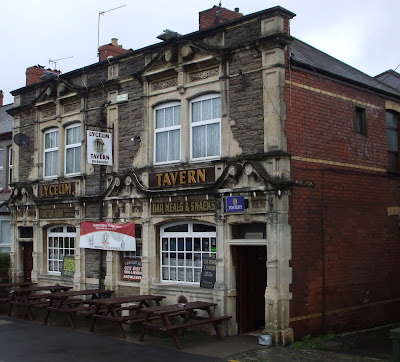 Open all day
The Lyceum Tavern is situated close to the M4 and opposite to where the Monmouthshire & Brecon canal now starts. Unusually for the area, the Lyceum Tavern features a highly decorative limestone frontage on what is an end of terrace brick-built building. 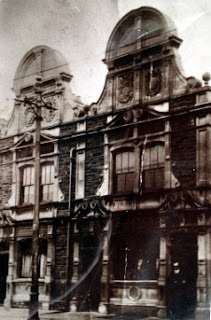 The building dates back to 1889 and has always been known as 'The Lyceum' even though it was only an off-licence for years and only became a pub when granted an on-licence in 1951, despite the owners requesting the change way back in 1926. In 1899 the off-licence was owned by a Mr Broadribb, who also owned a nearby bakery and sold beers from breweries such as Bass, Murphy's, Worthington's and Fuller's, in cask as well as bottles. The off-licence was purchased by local brewers Phillips in 1905, who were taken over by Simonds in 1948 and the pub became a Courage pub in 1960. Faded painted lettering on the side of the building, now barely readable, features the words 'Phillips' and 'Stout' on the brickwork. 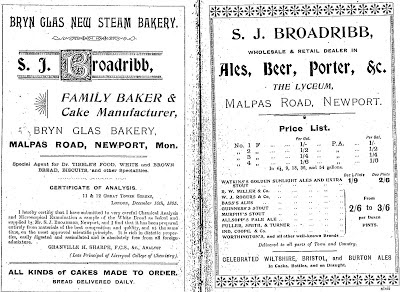 The pub sign features another Lyceum – a Victorian theatre in Newport that was built in the style of a Greek temple and was demolished in the 1960s.

The double doors on the right-hand side of the pub lead to a central island bar, made out of dark wood. Two gleaming chrome handpumps serve Courage Best, now much improved since being brewed in Bedford and Hancock's HB, brewed by Brains, and the beers are served in branded glassware. Occasional guest beers also make an appearance from time to time. The Lyceum Tavern is surprisingly large given its outside appearance and stretches back quite a way. There is also a restaurant/function room upstairs and a pool room at the rear.

The inside features gleaming copper-topped tables and an odd collection of old musical instruments are piled on a high shelf around the walls. Old advertising posters are on the walls and there is a sign from 'Vile Bros', a nineteenth-century soft drink manufacturer from Newport. In one section of the pub there is a charity bookcase and a raised area towards the front provides a small stage area. The Lyceum Tavern hosts regular live music, a quiz night and a folk club meets here every week.

Food is served 12-2, 5.30-9 Monday-Saturday with booking advisable for Sunday lunch, 12-3. There are printed menus as well as a large chalkboard showing specials.